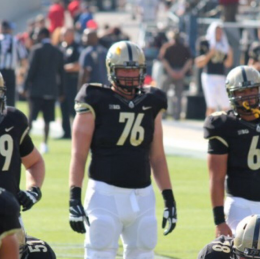 Jason Tretter, a first-year medical student at the Boonshoft School of Medicine, was an offensive lineman at Purdue University. (Photo by Thomas Tretter)

Jason Tretter, a first-year medical student at the Wright State University Boonshoft School of Medicine, knows what it takes to make it in college football. As an undergraduate student at Purdue University, he was an offensive lineman who played on both sides of the line.

“I played both tackle and guard on the right and left side. At first it was tough because a lot of offensive line is muscle memory,” said Tretter, who is from Richfield, a Cleveland suburb. “It was difficult at first, but I got the hang of it after a while.”

As a college athlete, Tretter also had to learn to manage a busy schedule. It was a balancing act, he said, to keep up with his studies while still making time for practices, weight lifting, team meetings and film sessions.

A typical day would begin at 6 a.m. with weightlifting. Team members took classes from 8 a.m. to 1 p.m., and then came together again at 2 p.m. for film, meetings and practice. Tretter had a few free hours in the evenings to study during the week. If the team had to travel for a game, he’d have more or less time on the weekends.

“It definitely took some organizational skills. You learn to get stuff done in a short amount of time. You lift and practice every day. With the strain it puts on your body, the last thing you want to do is study,” Tretter said. “There aren’t any tricks. It just came to knowing what I wanted out of school. I got good at fitting a lot of work into small periods of time I had available.”

Tretter’s work paid off, and he was honored with the Academic All-Big Ten award his sophomore year. The same year would see the beginning of a new sort of football career for Tretter, after an old knee injury flared up.

“When I was in high school, I tore my ACL and meniscus. My sophomore year at Purdue, I had a lot of pain but I played through the season,” Tretter said. “When I went in to have an MRI, I had no meniscus left and some pretty bad arthritis. The doctor told me if I wanted to walk when I was older that it was probably best to stop playing. The decision was made at that point.”

His junior and senior years, Tretter stayed on scholarship and became a student coach. He knew the playbook and was good at teaching young players the Purdue system. Every week in practice, he ran the scout team defense, which mimics that of the upcoming opponent’s. He traveled with the team and helped the offensive line coach during games by calling out the defense’s plays and assisting offensive linemen. 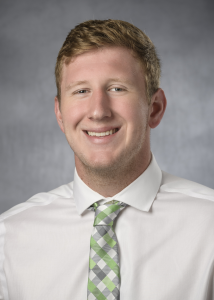 Tretter’s commitment to the team illustrates one of the reasons he always wanted to attend medical school.

“I love being on a team and having people rely on you. Just the adrenaline rush of being in an operating room or emergency room pushed me toward medical school,” he said. “With my injury, I also know how much impact a doctor has on people, not just athletes but anyone in general.”

Sense of community is also why he chose the Boonshoft School of Medicine.

“Now that I’m here, I can tell it’s not just one man for himself,” Tretter said. “We’re working together, and I think that environment nurtures growth and learning.”