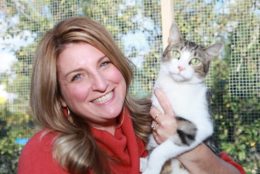 If the pups and kittens of Dayton were able to cast their vote for who they want to see chosen as Daytonian of the Week, we think this is who they would’ve picked.

Nora Vondrell, Executive Director of SICSA Pet Adoption Center in Kettering, has been commander-in-chief of the safe haven for homeless animals in Dayton for six years. Vondrell’s adult life has been dedicated to working for change, and to giving a voice to those without one.

Her heart’s capacity for compassion and her leadership has grown SICSA to the 1.4 million dollar non-profit organization it is today— truly fulfilling her passion and giving a voice to the animals who can’t speak for themselves.

What was life before SICSA?

I grew up in Clark County, between Columbus and Dayton. I graduated from Wright State with a bachelors in social work and my first job was working for Montgomery County Children Services. In my head, I thought I would always be in child welfare.

I was then recruited to Daybreak Youth Center for eight years. During that time I met my husband, moved to St. Anne’s Hill and we had our son there. St. Anne’s Hill is just a wonderful neighborhood, full of very lovely people. Very much front porch living. Now we live in Washington Township, our kids, 16 and 14 years old.