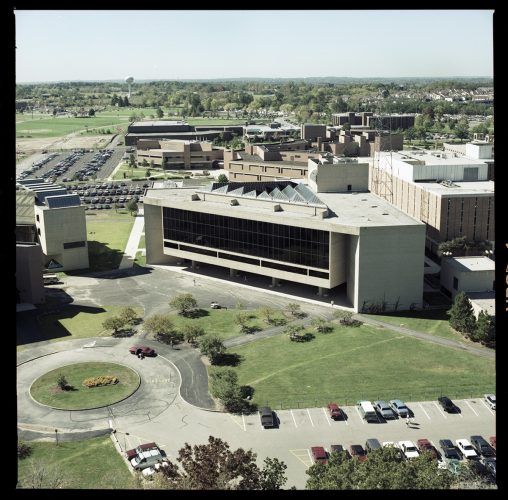 The 1990s brought a growth spurt for Wright State. Seven buildings opened, as well as three centers, and Alumni Field was dedicated.

The first building opened in the decade was the Wright State Nutter Center. In its first seven months, the Nutter Center booked 120 events. Since then, it has continued to be a stop on many major concert tours. When it isn’t hosting concerts or shows, it is the home of the Wright State men’s and women’s basketball teams.

In 1992, when Wright State celebrated its 25th anniversary, The Kellogg Foundation announced a $2 million grant to the College of Nursing and Health to fund The Partners for Community Health Development Project, which was designed to improve health care delivery to underserved residents and train health care professionals.

The Russ Engineering Center also opened in 1992. Today, Russ houses the College of Engineering and Computer Science, where students can expect access, affordability and preeminence.

The Center for Teaching and Learning opened in 1993. It offers programs and assistance to faculty for improving teaching, as well as aiding faculty members in creating accessible content for their classes. In the same year, the Women’s Center opened. The Women’s Center transforms the community by advocating for equity, eliminating gender-based barriers and providing diverse educational opportunities for the benefit of all.

In 1994, Harley Flack became the university’s fourth president and the first African-American president of a major metropolitan university in Ohio. Flack stressed collaboration and community building, both within and outside the campus walls. He forged a proactive relationship between Wright State and Dayton Public Schools to improve educational opportunities for all children. In addition, the state of Ohio provided Wright State money to help fund educational services to support students with disabilities. Flack died on March 29, 1998.

Flack was succeeded by Kim Goldenberg, who joined the university as chief of the General Internal Medicine division in 1983, eventually serving as dean of the medical school from 1990 to 1998. During his tenure as the university’s president, Wright State experienced tremendous transformation, including the creation of a nationally recognized first-year student experience, a broader and more innovative research enterprise, one of the strongest enrollment growth rates in the state and a successful fundraising campaign.

“Turning Points,” a defining piece of artwork by sculptor David Black, was installed on campus in 1999.