The Guardian’s Front-Row Seat to History

In November 1995, the eyes of the world came to Wright State University’s backyard. U.S. Secretary of State Warren Christopher and chief envoy Richard Holbrooke brought the leaders of Serbia (Slobodan Milosevic), Croatia (Franjo Tudjman), and Bosnia and Herzegovina (Alija Izetbegovic) to Wright-Patterson Air Force Base to find a way to end a nearly four-year conflict. 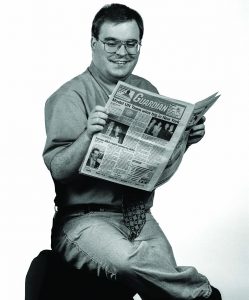 ght-Patterson was chosen because of its security and location. At The Guardian, we tried to think of ways to cover such a major world event taking place so close to campus. We took a chance and put in for media credentials to cover the talks. We got them. We were the only college newspaper there.

For three weeks, news editor Shawn Ruble, sports editor Bill Shea, and I went to the base for the talks and witnessed history.

“As a college newspaper editor, I covered many stories that touched on the Wright State community, but never thought I would cover an international event,” Ruble said. “Being able to report on such an event as the Bosnian Peace Talks was an experience I’ll never forget.”

Media from all over the world came to the talks. Satellite trucks were lined up as far as you could see. Hundreds of journalists came from places like the New York Times, CNN, Washington Post, and The Guardian (London and Wright State).

“I got a kick out of being in such proximity to world events,” Shea said, “which further convinced me to stick with journalism.”

During the negotiations, Milosevic took a break to go to what was then the fairly new Mall at Fairfield Commons, traveling with about 25 security guards. Members of the delegation even went to the Nutter Center to watch the Raiders take on the Croatian pro team. 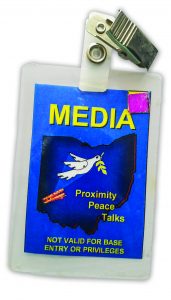 On the Monday before the talks began, Holbrooke held a press conference for local media. Ruble attended the press conference and even asked Holbrooke a question. In a November 1, 1995, The Guardian story written by Ruble, Holbrooke said, “This is the last best chance for peace” and that if the talks at the base failed “the war will resume.”

“The three weeks covering the events were the most memorable of my four years at The Guardian. The experience is one reason I still work in the media business today,” Ruble said.

I agree. After graduating from Wright State, I took a job at the Dayton Daily News, where I have been ever since. I’ve had the honor of going to national political conventions, presidential campaign visits, and other major political rallies. But I’ll never forget being a part of the history at Wright-Patterson and The Guardian.

I spent four years at Wright State, from 1998 to 2002, and I have many great memories of the university. I remember the days when I would have to wake up early on the weekend so I could call in and sign up for classes over the phone. Before we had internet portals, we had a bulletin board online for sharing information in my literature class taught by Carol Loranger. We also had a naming contest for The Hangar, which became the latest food facility at the university during my time there.

But my best memories are spending many days and nights at The Guardian. Working my way from a music reviewer as a freshman to editor-in-chief my senior year, we covered many events. During the 2000 elections (the year of the “hanging chads”), we were in the office until the wee hours of the morning trying to determine if Bush or Gore would be president.

Then the year after, as students were moving in on September 11, we spent the day interviewing staff, faculty, and classmates about their reactions to the terrorist attacks. All day long, we heard sirens and rumors of Wright-Patt being attacked. It went from a peaceful day of covering icebreaker games to tearfully watching the news in the Student Union. That was the one time during my four years at the newspaper that we missed our deadline and the newspaper was published a day late—without a front page headline, too.

Those kinds of events, plus working until 2 a.m. and chair races down the halls of the Student Union, really bonded us as a team. It was often late hours, but it was totally one of the best jobs I’ve ever had. I learned how to organize a team of young writers and editors who had to get a paper out by Wednesday morning.

Working at The Guardian prepared me for the business world and has definitely helped me succeed in operations management. I still miss those days with the great team at the newspaper.

Alf Butler (’02) is now the operations manager at Assurant, Inc.