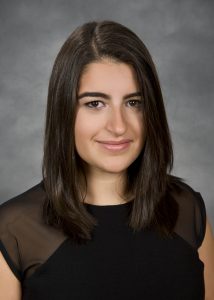 Maryam Shahin is taking a year off from medical school to conduct research in neuro-oncology. She hopes to gain a stronger understanding of the scientific process and the current status and future directions of cancer therapy in the central nervous system.

“I want to grow as a physician-scientist and develop the tools necessary to continue basic science research,” said Shahin, who is from Irvine, California. “I also hope to contribute new knowledge to the scientific community with regards to treating pediatric brain tumors.”

During her second year of medical school, Shahin discovered that she was passionate about research as she explored neuro-oncology in the lab of Robert M. Lober, M.D., Ph.D., assistant professor of pediatrics at the Boonshoft School of Medicine. She researched diffuse intrinsic pontine glioma, an aggressive pediatric tumor with an extremely poor prognosis. Overall survival is eight to 11 months, and the median age at diagnosis is 7 years old.

“It is particularly devastating, because no effective treatment exists. The data has demonstrated different responses to hypoxia, which occurs when tumors have been deprived of oxygen,” said Shahin, who presented research at the Society for NeuroOncology Pediatric Conference in New York in June. “These different cellular responses may contribute to differences in cell behavior, patient prognosis and tumor responses to therapy.”

During the fall of 2016, Samuel Cheshier, M.D., Ph.D., assistant professor of neurosurgery at Stanford University School of Medicine, gave a seminar at Wright State in the Neuroscience Engineering Collaboration Building. Shahin attended the lecture and heard Cheshier discuss the ongoing research in his lab investigating the use of immunotherapy.

“Redirecting the immune system to recognize the tumor is a promising frontier in cancer therapy as it lacks the devastating side effects seen in traditional cancer therapeutics,” said Shahin, who graduated from the University of California-Davis with a bachelor’s degree in neurobiology, physiology and behavior. “After listening to Dr. Cheshier, I wanted to dedicate time exploring immunotherapy and its role in treating various neurological malignancies.”

Traditional methods of cancer treatment often have severe side effects, because they lack the ability to differentiate between normal and cancerous tissue.

“This is of utmost importance in our pediatric population, as they are still developing. Treating their cancer comes at a very heavy price, particularly to their developing nervous system,” Shahin said. “Immunotherapy is novel in the sense that it can specifically target the tumor, almost eliminating many of the side effects that happen with traditional treatment methods.”

“I feel fortunate to be in a time and environment where technology and advancements have made this a possibility,” she said. “We are able to take tumors directly from the operating room, culture the cells and use them for various investigations to better understand the biology of the tumor.”

Her research experiences at Wright State and Stanford have introduced her to mentors who have helped train her.

“The mentors I have met through research have been some of the most valuable aspects of my education thus far,” she said. “Their support and constant generosity in contributing to the training of future physician-scientists has been remarkable. Having the opportunity to learn from their expertise has been a growing experience in itself.”

“Medicine is wonderful because we are given an opportunity to impact daily lives on a personal level,” said Shahin, who established a student chapter of the American Association of Neurological Surgeons at the Boonshoft School of Medicine. “However, research is powerful, as it obtains the innate ability to effect change on a larger scale and inform medical practice.”

She also has learned about grant writing, creating posters and developing manuscripts for publication. Scientific meetings have provided opportunities to learn about experiments being conducted worldwide and meet with physician-scientists.

She encourages women interested in pursuing a career in neurosurgery to persevere.

“While it is still a largely male-dominated specialty, there is a growing and much needed female presence in the neurosurgery community,” Shahin said. “It is likely that most of your mentors will not always look exactly like you, and that’s OK.”

Wright State became an independent institution in 1967 and spent the next 50 years growing into an innovative leader in student-led research. In 2017, it celebrates its 50th anniversary as an independent public university, culminating with a special Homecoming celebration Sept. 29 through Oct. 1.