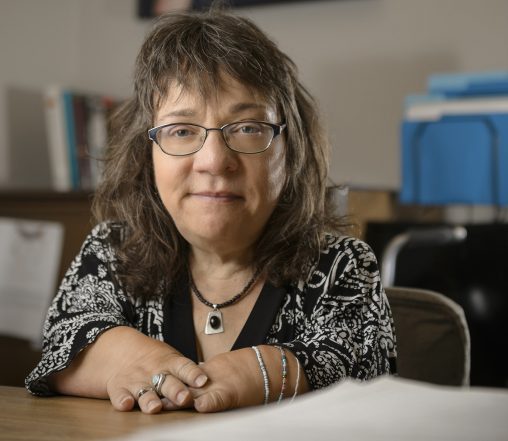 Julie Williams, professor in the School of Professional Psychology, was one of several Wright State-affiliated speakers who participated in TEDxDayton on Oct. 20.

Wright State faculty and alumni shared their expertise on a variety of topics such as experience as an Iraqi refugee, embracing life after menopause and Generation Z when they speak at TEDxDayton.

The fifth annual TEDxDayton took place at the Victoria Theatre in Dayton on Oct. 20.

TED is a nonprofit organization devoted to spreading ideas through 18-minute-or-less talks in more than 100 languages, and focuses on talks related to technology, entertainment and design, as well as current societal issues. TEDx is a program of local, self-organized independent events that feature TED-style videos and speakers.

Mohamed Al-Hamdani, who graduated from Wright State in 2003 with a degree in sociology, came to Dayton as a refugee with his family when he was 10 years old. He worked with the Department of Defense as a cultural adviser to the Marines, developing and implementing cultural immersion training for Marines who were going to be deployed to Iraq. He talked about his experience as a refugee.

Kniffley and Williams spoke together about solidarity. Kniffley’s area of expertise is research and clinical work with black males. He has written four books on black male mental health, black males and the criminal justice system and academic achievement. Williams is known for saying “speak your truths” and “lean in” to difficult dialogues about privilege, power and oppression.

Adrian McLemore, who holds a degree in political science from Wright State, works for the Annie E. Casey Foundation in Baltimore, which is focused on the well-being of children. Passionate about serving children and families, he talked about kinship care.

Rosalind Jackson, who completed her medical training at the Boonshoft School of Medicine, is a board certified obstetrician and gynecologist. She discussed life after menopause. Jackson is the recipient of numerous awards, such as the National Conference for Community and Justice of Greater Dayton Humanitarian Award in 2014. In 2015, she was named one of Dayton’s Top 25 Women to Watch. 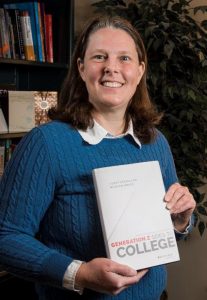 Corey Seemiller is assistant professor in leadership studies in education and organizations.

Seemiller has worked in higher education for more than 20 years. She is the author of “Generation Z Goes to College” and “The Student Leadership Competencies Guidebook,” which helps educators to develop intentional leadership curriculum. She spoke about Generation Z.

Small is director of the Applied Behavioral Science master’s program and holds a joint appointment with College of Liberal Arts and the Boonshoft School of Medicine. She is also a member of several editorial boards of social science and health journals, such as the Journal of the Association of Nurses in AIDS care. She has served as a grant reviewer for numerous agencies, such as the Ford Foundation Pre-doctoral, Doctoral and Post-doctoral Fellowships. She discussed HIV/AIDS in older adults.

Wonders, director of Wright State’s Sports Science Program and founder of Maple Tree Cancer Alliance, is passionate about making exercise part of the standard of care for those battling cancer. She provides free exercise training, nutrition counseling and emotional support to cancer survivors in the Miami Valley. She was named one of the Dayton Business Journal’s 2017 40 under 40, and Maple Tree has been awarded Best in Dayton for Health and Fitness four years in a row. She discussed the role of exercise in cancer care.

Diane Farrell, co-chair of TEDxDayton, said she was excited to work with Wright State affiliates.

“Wright State University has been an invaluable partner since the beginning of TEDxDayton. As a matter of fact, Wright State was one of the first local institutions to see the value of hosting a TED event in our community,” Farrell said. “In each of the five years of TEDxDayton, Wright State has helped to carry forward the purpose of TED, sharing ideas worth spreading. From thought-provoking talks, to mind expansive performances, Wright State’s faculty and representatives have helped to shape TEDxDayton into the high-quality event it is today.”

Wright State became an independent institution in 1967 and spent the next 50 years growing into an innovative leader in community engagement. In 2017, it celebrates its 50th anniversary as an independent public university.