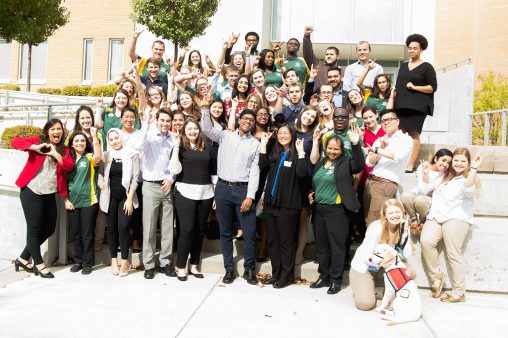 Members of Dean Student Advisory Boards and the Student Government Association gathered together to talk about their past successes, current plans and ideas for the future.

Student leaders from across campus gathered to collaborate and discuss the future of their colleges at Wright State’s College Rep Leadership Summit on Oct 7.

Members of Dean Student Advisory Boards and the Student Government Association gathered together in the Student Success Center to talk about their past successes, current plans and ideas for the future.

Advisory board members from the Raj Soin College of Business and the colleges of Nursing and Health, Liberal Arts, Science and Mathematics, Engineering and Computer Science and Education and Human Services attended the event.

Wright State President Cheryl B. Schrader opened the event with a speech about the university’s history, highlighting its success over the last 50 years, as well as what she expects to do in the future. She commended the students for their dedication to the university.

“When I want people to learn about Wright State, I put you in front of them,” she told summit participants.

After her speech, the advisory board groups discussed their achievements within their colleges. Each group wrote down past successes, future plans and challenges they have faced.

David Baugham, a senior supply chain management major and Student Government president, said the exercise helped align students’ vision for the university. The advisory boards shared ideas such as clothing, toy and hurricane supply drives, volunteering with local organizations such as Cindy’s Closet and Shoes for the Shoeless and volunteering at Wright State events.

A common theme was recruitment, both outside and inside the university. Students talked in small groups about why they came to Wright State as well as what they admire about the university and why they decided to stay.

Katie Howard, a member of the Dean’s Student Advisory Board for the College of Education and Human Services, said she is a second-generation Raider, so Wright State has been a part of her family her whole life. Howard said the campus was large enough that she had research opportunities, but small enough that she could have one-on-one connections with other students and faculty.

Advisory board members from the Raj Soin College of Business and the colleges of Nursing and Health, Liberal Arts, Science and Mathematics, Engineering and Computer Science and Education and Human Services attended the summit.

The day finished with Baugham and Holley Mapel, vice president of Student Government, challenging the advisory boards to volunteer at recruitment events or host a Day with a Raider event within their college or their own recruitment event.

Mapel said she thought the summit went very well and it provided an opportunity for the student leader groups to interact in a way they hadn’t before.

“It definitely exceeded my expectations, and I think it’s because of the students that were present and the brainpower, insight and passion that they brought, that made the summit what it was,” she said. “David and I started brainstorming in April and over the summer, and I think it really came to fruition. It was really awesome to have President Schrader here to kick-start the event.”