Freshmen get involved with Student Government through internships 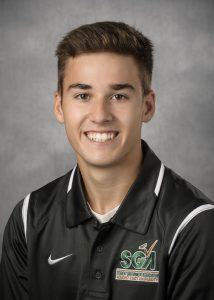 Wright State’s Student Government Association (SGA) welcomes freshmen to get involved through an internship program that enables them to gain leadership skills, participate on campus and make new friends.

Freshmen in the program sit on Student Government committees with the other interns to discuss matters such as academic affairs, outreach initiatives and campus safety and accessibility.

The program originated as a shadowing program that enabled freshmen to work one-on-one with the senators of SGA. During the program’s first year, 14 freshmen were involved. Among them was Doug Benedict, who is now the chief of staff of SGA.

“We were feeling it out and figuring out how everything would mesh together and at the end of the year, I stepped up and said I could be the director,” Benedict said.

Benedict rearranged the program so it emulated an all-freshmen Student Government, with students serving on their own committee. After Benedict took over the program, the number of freshmen in the program jumped from 14 to 37.

“Our focus was to give the freshmen a taste of Student Government and a taste of student organizations period,” he said. “One of the most important parts of retention is student life.”

Zach Moorman, the current director of the internship program, was among Benedict’s first group of freshmen. During orientation, he worked directly with new students to encourage them to join the program.

“Working with the freshmen really inspired me to take the lead on this and mentor them throughout the year,” Moorman said.

To encourage more involvement in Wright State, each freshman gets a checklist of events they can attend. For example, they can go to a University Activities Board event, a Residential Community Association meeting or a Rainbow Alliance meeting to see everything Wright State has to offer.