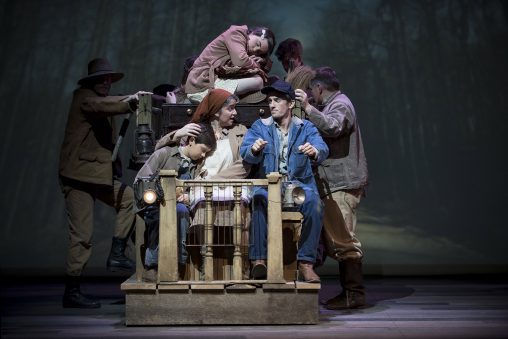 Wright State Theatre’s production of “The Grapes of Wrath” runs Feb. 1 to Feb. 11 in the Festival Playhouse in the Creative Arts Center. (Photos by Erin Pence)

Wright State University Theatre continues its 43rd season with the Tony Award-winning drama “The Grapes of Wrath” Feb. 1 to Feb. 11 in the Festival Playhouse in the Creative Arts Center.

Tickets are $22 for adults and $20 for students and senior citizens. For tickets and theatre information call the Box Office at 937-775-2500 or purchase single tickets online.

“The Grapes Of Wrath” won the 1990 Tony Award and Outer Critics Circle Award. It was adapted by Frank Galati in 1988 from John Steinbeck’s classic novel, which won the Pulitzer Prize and National Book Award.

The play follows the Joads, a family of sharecroppers in Oklahoma who are driven west by the Depression and the drought of the Dust Bowl. They pile into a truck and head to California seeking farm work. But the Golden State isn’t the land of riches they had hoped for.

Wright State’s production of “The Grapes of Wrath” is directed by Marya Spring-Cordes (“The Music Man,” “The Children’s Hour”). The set design is by Pam Knauert-Lavanway (“No, No Nanette,” “Peter Pan”), lighting design by Emily Hope (“Heathers: The Musical,” “Urinetown”), projection design by Matthew Benjamin (“Restoration!,” “Fiddler on the Roof”), costume design by Elizabeth Bourgeois (“9 to 5”), properties by John Lavarnway and sound design by James Dunlap.