Thriving in the Greek life

Brooke Johnson-Leppla received an outstanding alumna award at the Association of Fraternal Leadership and Values conference. 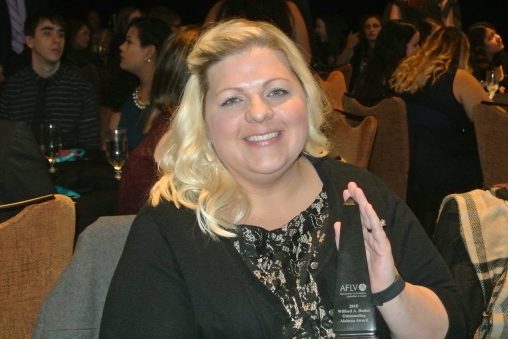 Brooke Johnson-Leppla, a Wright State graduate and current staff member, and several students were honored at the Association of Fraternal Leadership and Values central conference.

Brooke Johnson-Leppla received the Outstanding Alumna Award at the Association of Fraternal Leadership and Values central conference in Indianapolis.

Johnson-Leppla, event and marketing coordinator for the Raj Soin College of Business, is an adviser to the Eta Pi chapter of Zeta Tau Alpha at Wright State. Wright State’s Panhellenic Council nominated Johnson-Leppla for this award.

Gina Keucher, program director of student activities, said Johnson-Leppla is a tireless volunteer for Zeta Tau Alpha, not only as an adviser, but also as an alumna volunteer.

“I can always count on Brooke to be there to serve our community,” Keucher said. “I honestly don’t know what I would do if she stepped away.”

Johnson-Leppla, who received a Bachelor of Science in Business in 2005 and a Master of Education in 2011 from Wright State, is co-founder of the Fraternity and Sorority Alumni Society. She is working to endow a scholarship and assist with networking panels. She helped host Wright State’s first Greek reunion during the university’s 50th anniversary celebration at Homecoming last fall.

Holly Gersbacher, associate director of alumni relations at Wright State, said that Johnson-Leppla is a leader in every sense. She helps students in fraternities and sororities connect to their future, and through the Fraternity and Sorority Alumni Association, she brainstorms with other alumni to find ways to encourage current student success.

Johnson-Leppla wasn’t the only Wright State community member to be honored at the Association of Fraternal Leadership and Values central conference.

Sarah Christy, president of the College Panhellenic Council and a member of Kappa Delta Sorority, and Austin Rex, a member of Sigma Phi Epsilon Fraternity, received first place honors in their division in the Order of Omega case study, a competition that encourages fraternity and sorority members to examine current issues in fraternity communities.

Through Campuspeak, two more Wright State students brought home awards. Campuspeak Pitch encourages students to pitch an idea that will solve a campus issue in a manner similar to the TV show “Shark Tank.” Lauren Pelan, president of the Fraternity and Sorority Council, and Whitney Byrd, member of Phi Sigma Rho Sorority, won the Association of Fraternal Leadership and Values Central Competition and will continue on to compete against schools that participated in other association conferences.