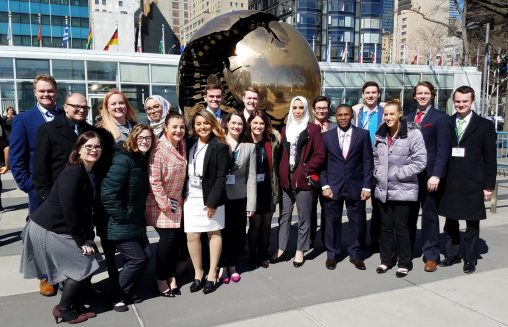 Wright State’s Model United Nations program has always been a point of excellence for the university, growing into a world-renowned program since its inception in the 1970s.

Wright State represented the Republic of Turkey in the competition. Students received a briefing in New York by the Turkish Mission to the United Nations.

This year’s team was led by head delegates Amanda Baker and Crystal Burns, both students in the Master of Arts Program in International and Comparative Politics Program.

During the Model United Nations conference, students participate as delegates to various UN committees, competing against teams from other universities. Participants research and formulate political positions based on the actual policies of the countries they represent. To prepare for the competition, Wright State delegates researched several topics like cybersecurity, humanitarian assistance, the spread of drugs and how to change it and what to do about chemical weapons.

“We did really well this year,” Shannon said. “I couldn’t be prouder.”

Next year will be Wright State’s 40th anniversary participating in the National Model UN Conference in New York.