The Wright Womxn’s Leadership Network was launched at Wright State University at a gathering of leaders and aspiring leaders on April 19.

“Our goal is for womxn to connect and broaden their own networks at Wright State,” said Stephanie Goodwin, director of faculty development and leadership. The networking breakfast served as a launching point for a more formal network for womxn in leadership.

“You are a testament to the need for opportunities for womxn of all backgrounds, experiences and positions to come together and create a community,” Goodwin told the group.

To ensure inclusivity, the breakfast was called “Wright Womxn,” an inclusive spelling of the word “women” that recognizes the intersectional identities of all women, including trans women and women of color.

Wright State President Cheryl B. Schrader welcomed the group and encouraged them to reflect on and share their own experiences, and to begin building connections with others on campus.

“While it is incredibly important to build strong professional networks for womxn’s success, I have found from my own personal experience that it is not often an easy task,” said Schrader. “You need to be very purposeful about creating your networks.” 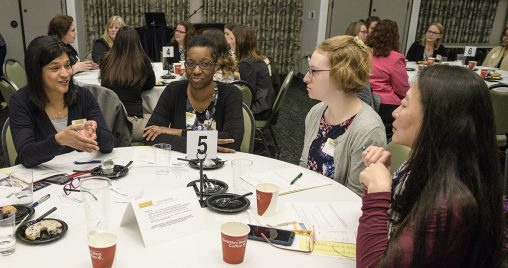 Current and aspiring leaders in faculty and staff roles at Wright State shared their stories with one another.

She noted that throughout her career, she often had to find her own mentors.

Schrader shared a story from her time at Missouri University of Science and Technology, where a group of womxn created an informal cohort for aspiring leaders and called themselves “The Exaltation,” which is a group of larks. She added that a group of larks is also called an ascension or a happiness, which is consistent with the saying, “happy as a lark.”

“I always thought that ‘The Exaltation’ was a very poetic way to symbolize that we are stronger and happier together than on our own,” said Schrader. The Exaltation would invite Schrader to join them, giving her, even as the chancellor, a place to network and share stories and experiences. She wants to offer that opportunity to others.

Schrader said that making connections with other womxn is so important — whether it’s through formal or informal networks.

“The career and leadership pathway of every womxn is unique,” she said. “Each of us has our own story; our personal obstacle course that we’ve had to overcome; our glass ceiling to shatter.”

Approximately 75 womxn who are current or aspiring leaders in faculty or staff roles at Wright State attended the networking breakfast, which was organized collaboratively by the Office for Faculty Development and Leadership and Human Resources. The Higher Education Resource Services (HERS) and the ACE Women’s Network Ohio sponsored the breakfast meeting.

Wright State has sponsored faculty and staff to participate in the HERS Summer Institute, a preeminent leadership development program that prepares women to become high-ranking decision-makers in higher education. The Wright Womxn’s Leadership Network is the result of several HERS alumnae wanting to offer more opportunities for their fellow womxn on campus. 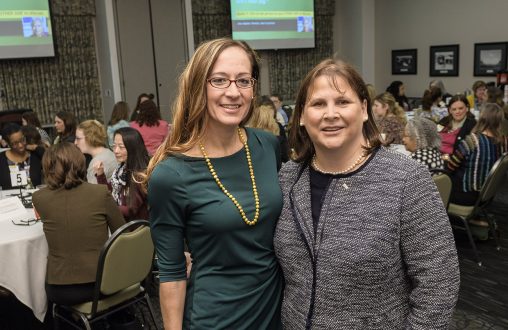 Two HERS alumnae led the table sharing exercises: Goodwin and Jennie Buckwalter, assistant dean for community and student engagement in the College of Liberal Arts.

“People in our networks can serve as mentors, as advocates, as our champions,” said Buckwalter. “They help us find new opportunities, they support us in leading successfully, and they offer encouragement during challenging times.”

Womxn were seated at round tables with others they didn’t know to encourage connections and sharing. A series of thought-provoking quotations and questions facilitated dialogue on topics such as developing strengths and recognizing one’s hidden powers.

“We share a lot in common but we are all unique,” Buckwalter added.