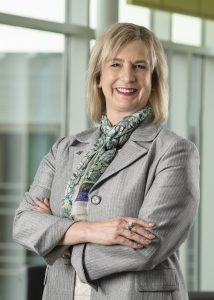 After a two-year budget shortfall, Wright State University is projecting a surplus for 2018.

In a letter sent to the Wright State community, President Cheryl Schrader stated the university is “righting our financial ship,” and is predicting a $7.2 million budget surplus when fiscal year 2018 ends June 30. The funds will help build Wright State’s reserves, she said.

“The turnaround is the result of hard work, difficult decisions, and sacrifices by everyone in the Wright State family,” Schrader wrote. “We have come a long way in a short time.”

The health of Wright State is important to the Dayton community as its the third-largest school in the region and is among the largest employers.

Wright State has reduced expenses by an estimated $50 million this fiscal year, and non-compensation spending and medical claims are both running under budget. However, its reserve funds are still “critical low.” Schrader said they need to continue to be “conservative, frugal and anticipatory.”

While financial progress has been made, Schrader said avoiding fiscal watch is “by no means a certainty.” Schools are placed on fiscal watch when there are concerns about financial stability. If WSU finds itself on the fiscal watch list, it would be required to submit a financial recovery plan to the Ohio Department of Higher Education, consult with the state auditor’s office and submit quarterly financial reports to the state.

“Regardless of the outcome, we will exit this fiscal year in a much stronger position than anyone had thought possible one year ago,” Schrader said.

Balancing next year’s budget will remain a significant challenge for Wright State. The FY 2019 budget, which has yet to be approved by the university’s board of trustees, takes into account a potential 6.2 percent decline in enrollment credit hours, and a 1.7 percent decrease in state support. This equates to a $1.4 million loss from FY 2018.

Expenses in FY 2019 are expected to total $271.7 million, leaving WSU with a $3 million surplus, which Schrader said will help build reserves.

Wright State’s budget strategy for next year is different from past years. Schrader said they have tried to accurately and conservatively estimate revenue first and then build an expense budget that fits within the revenue projections. In the past, she said there were some “very unrealistic targets for tuition and fees” that were driven by the expense budget.

In addition, Wright State is budgeting an increase of $5.5 million to address higher-than-usual medical claims it experienced in FY 2018, $3.5 million for fee waivers previously unbudgeted, and $1 million for promotions. New items also include $1 million to buffer enrollment fluctuations and $1.3 million for strategic investments.

If the university did not need to budget the medical claims and fee waiver increases, next year’s budget would have a $12 million surplus, instead of $3 million, even with enrollment declines.

“After reviewing proposed budgets by the organization units, we still have a gap to close,” she wrote.

WSU also is working on its financial stability plan, which includes strategies for revenue enhancement and operational efficiencies for both the short-and the long-term. Schrader said they will “systematically explore every pathway to ensure we are using our resources in the most effective way possible.”