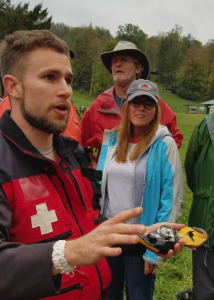 Medical student Brett Foster is a volunteer with the National Ski Patrol, teaching other ski patrollers how to use a descending device to lower people during a chairlift evacuation, responding to emergency situations and treating injured skiers.

Since beginning medical school at the Wright State University Boonshoft School of Medicine, Brett Foster has been a volunteer with the National Ski Patrol at Mad River Mountain in Zanesfield, Ohio.

“I love to ski, and I love to help others,” Foster said. “I absolutely love the rush that comes with prehospital emergency care. There’s nothing more satisfying than inserting yourself into an unknown, chaotic, critical situation and being able to resolve it or at least be a part of the team that does.”

This experience is a service-learning elective for him at the Boonshoft School of Medicine.

“I am very thankful I was able to use my volunteer service with the National Ski Patrol as my service-learning elective,” said Foster, who also was a volunteer firefighter, emergency medical technician and HAZMAT technician when he was an undergraduate student at Indiana University. “The National Ski Patrol is a great organization that has had a very formative impact on me. It was my first exposure to medicine when I was a child.”

“The majority of injuries we treat are musculoskeletal injuries, such as wrist fractures, dislocated shoulders, fractured clavicles, sprained knees and lower leg fractures,” Foster said. “Wrist fractures are the most common due to snowboarders falling backwards and reflexively extending their arm to catch a fall.”

He also has treated people who have frozen their tongues on metal parts of the chairlift in addition to those who suffer heart attacks. The worst accidents he has seen are traumatic brain injuries that result from jumps or collisions at high speeds.

He advises all skiers to wear a helmet. “If it is your first time skiing, get a lesson,” Foster said. “It will make the rest of the day infinitely more enjoyable.”

The National Ski Patrol sparked Foster’s interest in medicine when he was a child. His father was a volunteer ski patroller with the National Ski Patrol and a lead first aid instructor at Paoli Peaks, a ski resort in southern Indiana about 45 minutes from his hometown of Louisville, Kentucky.

“I was actually on skis before I can remember,” Foster said. “Because of my dad’s volunteer work, I spent many hours being back-boarded, splinted and bandaged so he could practice his first aid skills on an actual child.” 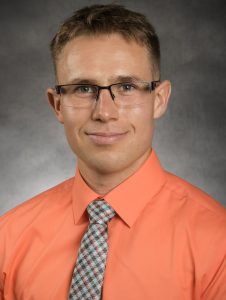 After graduating from the Boonshoft School of Medicine, Brett Foster would like to enter a residency in emergency medicine.

Foster could hardly wait to become a volunteer ski patroller. When he turned 16, he completed the training and certification process. He spent his final two years of high school and four years of undergraduate studies at Indiana University as a volunteer ski patroller, helping other skiers, providing emergency care and enhancing the safety and enjoyment of snow sports.

After graduating from Indiana University with a bachelor’s degree in human biology, Foster joined the U.S. Army. He had been in ROTC while a student at Indiana University. He was stationed at Fort Campbell, Kentucky, with the 101st Airborne Division. He served as an officer and an engineer, focusing on civil affairs.

“Ever since I was a kid, I knew I was going to serve in the military, partly because it is a bit of a family tradition,” Foster said. “I was enamored with the ideas of sacrifice, challenge and patriotism.”

After he completed his service to the U.S. Army, Foster followed his dream of becoming a doctor and applied to medical school. He realized that Mad River Mountain, a ski resort in Zanesfield, Ohio, is an hour away from Dayton. Being able to re-affiliate with the National Ski Patrol factored into his decision to attend the Boonshoft School of Medicine.

Foster drove immediately from the medical school’s White Coat Ceremony to attend a training event at Mad River Mountain. The White Coat Ceremony is the formal beginning of medical education, where students receive the symbol of their chosen profession — the white coat — and take their first oath of professional medical ethics.

While Foster was excited about medical school, he also was thrilled about volunteering at Mad River Mountain.

“I get to work with an incredibly dedicated, passionate and fun group of people through National Ski Patrol,” he said. “I knew I would crave that sense of camaraderie leaving the military. Fortunately, I had this opportunity waiting for me.”

Foster plans to graduate from the Boonshoft School of Medicine in May 2020. He would like to enter a residency in emergency medicine. But in the meantime, he plans to continue his volunteer work with the Mad River Mountain Ski Patrol until he graduates. Then, he hopes to join another ski patrol wherever he goes for residency.