Take me to Wakanda 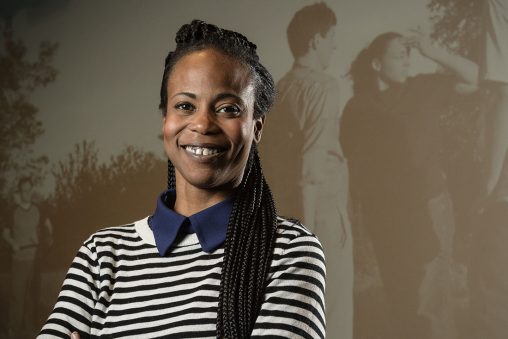 The Wright State Alumni Association named Hannah Beachler, production designer on “Black Panther” and “Moonlight,” the winner of its 2018 Alumna of the Year Award. (Photos by Erin Pence)

The Wright State Alumni Association has announced Hannah Beachler ’05 as the winner of its 2018 Alumna of the Year Award, an honor presented to Wright State graduates who have attained a significant level of achievement in their chosen field.

The award will be presented to Beachler on Friday, Oct. 5, as a part of Homecoming Weekend 2018.

“Hannah was an outstanding choice for our Alumna of the Year Award this year. Our awards committee, made up entirely of Wright State alumni, looked closely at her recent accomplishments and international successes as a production designer on the Academy Award-winning film ‘Moonlight’ and the critically acclaimed film ‘Black Panther.’ Her accomplishments, combined with her love and generosity toward her alma mater, make her an excellent example of a Wright State alumna that we wanted to recognize,” said Greg Scharer, executive director of alumni relations.

In February, Beachler’s film “Black Panther” was released in theaters to a fanatical and record-breaking reception. In its opening weekend, the film earned $370.5 million worldwide, and by Mother’s Day weekend, it had already grossed more than $696 million, earning it the number three spot in the U.S. for the top grossing films of all time.

Critics and fans alike raved about it within the first few hours of the opening, but perhaps the most exciting part of the film, especially for Wright State students and alumni, wasn’t just the film itself, but seeing Beachler listed predominantly in the credits.

“(She is) an inspiration to young female artists and workers in motion pictures, young African Americans — a minority in motion pictures because it’s a white male-dominated industry,” said Stuart McDowell, professor and artistic director of the Wright State Department of Theatre, Dance and Motion Pictures. “Hannah is blazing the trail for young African American, female production designers.”

It was Beachler’s expertise and vision that created every detail of the world of Wakanda, the fictional setting in “Black Panther,” for millions of moviegoers.

“You know, we had to create all of this history — just like you’d know about any city, or your own hometown. That’s how much we had to go in on Wakanda,” Beachler said in an interview with The Root’s online channel The Glow Up.

Beachler spent 13 months working on the film, overseeing a $30 million art budget and a dedicated crew of several hundred people.

“You have to invest in yourself,” Beachler told an audience of Wright State performing arts students during a visit to campus in December 2017. “I believed in the world I created. You have to believe in yourself and your abilities.”

In her interview with The Glow Up, Beachler said that if people actually knew the amount of work that went into designing “Black Panther,” “their heads would explode — literally just explode.”

Her first step in the process, shortly after being hired she said, was traveling to Cape Town, South Africa. She arrived two weeks before the crew to conduct her research.

“We spent as much time in each place as we possibly could, and saw as much as we possibly could, because it was important for me to get the vegetation right, the rock color right — the way that the rocks are sort of different,” she said in the interview with The Glow Up. “They’re horizontal, as opposed to what we’re used to seeing in the West. To make sure that the color of the sand was right, to make sure the color of the water inland was right, as opposed to what it looked like on the coast of Africa.”

Hannah Beachler talking to performing arts students during her visit to the university in December 2017, when she donated the award she received for “Lemonade” to the Wright State Motion Pictures Program in honor of her late classmate Carol Trevino, of Wilberforce.

Prior to “Black Panther,” Beachler was the production designer on “Moonlight,” which won the Academy Award for Best Picture in 2017 and the Golden Globe Award for Best Drama. She received the 2017 Art Directors Guild Award for Excellence in Production Design and Art Direction for her work on “Lemonade,” Beyonce’s visual album that originally aired on HBO.

Previously, she was the production designer on “Miles Ahead,” a biographical film based on the life of jazz musician Miles Davis; “Creed,” the seventh film in the “Rocky” series; and “Fruitvale Station,” which won the Grand Jury Prize for Best Film and the Audience Award for Best Film at the Sundance Film Festival in 2013.

Though she had a relatively big budget to work with on “Black Panther,” she said she is normally used to far smaller budgets and teams on her smaller films, including “Moonlight” and “Fruitvale Station.” Her art department on “Moonlight,” consisted of only five people.

Her previous film and video projects, she said, prepared her to work on “Moonlight.” She started her career as a set dresser, arranging objects on a film set. On every project, she learned as much as she could, including set painting, carpentry and visual effects.

During her talk with Wright State students last December, she emphasized that filmmakers have to be willing to work hard and persevere through challenges.

Beachler’s success in Hollywood is a reflection of her work while she was a student at Wright State. She said the education she received in Wright State’s Motion Pictures Program helped prepare her for her career. She was exposed to many important films and literature, allowing her to talk on the same level as directors do. Even still, her journey from Centerville to Hollywood has been one of passion and hard work.

“Her success has shined because of her willingness to be resourceful,” said McDowell, “giving a voice to something unique and finding her inner passion.”