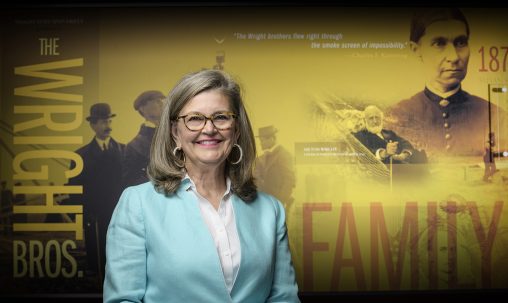 Amanda Wright Lane is the fourth member of the Wright family to receive an honorary degree from Wright State. (Photo by Erin Pence)

The university’s graduation ceremony begins at 10 a.m. Saturday, May 4, in the Wright State Nutter Center. The spring class of 2019 includes 2,072 graduates.

Wright Lane is the fourth member of the Wright family to receive an honorary degree from Wright State. Her great aunt and uncle, Ivonette Wright Miller and Horace Wright, received honorary degrees in 1981, and her father, Wilkinson Wright, was honored in 1999.

“I consider it a high, high honor,” she said. “I was so proud the day my dad received his degree, his passion for this university was so evident. And I believe I caught that passion too!”

She said the honorary degree is wonderful recognition of the volunteer work she has done at the university “just as my father and great aunt and uncle did before me.”

“I am not sure how to define what it is that I do — connect people with a love of aviation, share a legacy that really belongs to all of us and take Dayton’s message of innovation around the world,” she said. “But it certainly is terrific to know Wright State values something I love to do.”

Wright Lane is an enthusiastic supporter of Wright State, saying she has a deep appreciation for the university’s mission of reaching out to a student population that can be overlooked.

“One of the things I’ve always admired about the university is its interest in meeting students where they are — an acceptance of students who come from different backgrounds, who have different abilities academically and physically and who also may be in different stages in their lives when they begin their education,” she said. “My great granduncles certainly were different in their thinking, and early on they struggled to find acceptance of themselves and their ideas.”

As co-chair, Wright Lane played an instrumental role in the success of Rise. Shine. The Campaign for Wright State University, which raised more than $167.7 million. She is currently co-chair of Discover Your Story: The Campaign for the Wright State University Archives Center. The $6.5 million fundraising campaign will move the Special Collections and Archives to a new home.

Special Collections and Archives is home to the largest repository of Wright family materials in the world, featuring more than 4,000 original photographs, documents, publications, medals and awards. For 30 years, Wright Lane has been a frequent visitor to Special Collections and Archives, bringing guests from around the world to campus to see her family’s personal papers, diaries, photos and memorabilia.

Like so many others, Wright Lane knew from history books that the Wright brothers were the first to fly. However, after many visits to the archives she discovered the men behind the history — they were sons, businessmen, uncles and, of course, brothers.

“The scientific process they developed that led to the invention of the airplane and human flight was brilliant. They achieved what was thought to be impossible,” Wright Lane said. “But understanding who these two young Midwestern men were and the environment they came from is by far the most interesting part of their story to me.”

Once the Wright State Archives Center opens, Wright Lane said she envisions it becoming a hub of many activities for the university and a place that attracts not only researchers but also community groups, educators and children.

“It should be a dynamic meeting space for Wright State that is not only a comfortable place for students to explore or do some studying, but a place the public will enjoy as well,” she said. 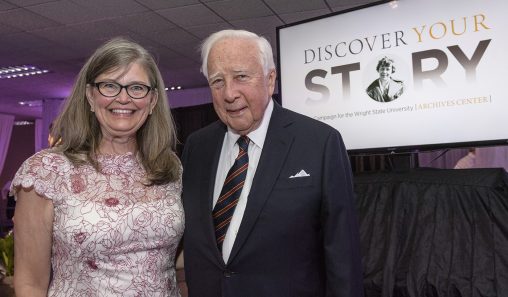 Amanda Wright Lane and David McCullough are co-chairs of the Discover Your Story campaign to raise funds for a new home for Wright State’s Special Collections and Archives. The archives has the largest repository of Wright family materials in the world.

Wright Lane regularly consults with aviation experts and scholars studying the Wright brothers’ history, including Pulitzer Prize-winner David McCullough, who conducted research in Special Collections and Archives for his book “The Wright Brothers.” She also works with community leaders in both Ohio and North Carolina to raise awareness for the two national parks dedicated to telling the story of her great granduncles.

She also serves on the boards of the National Aviation Heritage Alliance, Wright Image Group, Wright B Flyer, Inc., and the First Flight Foundation in North Carolina, as well as on the Ohio Aerospace and Aviation Council. She was appointed by President Obama to the advisory council of the Smithsonian’s National Air and Space Museum.

Wright Lane has received the Public Service Award from the American Institute of Aeronautics and Astronautics, the Aviation Trail’s Trailblazer Award and the lvonette Wright Miller Award for volunteerism from the National Aviation Heritage Alliance. She has also been recognized by the Kittyhawk Chapter of the Air Force Association and was named a Woman of Influence by the YWCA Dayton and one of Dayton’s Top Ten Women.

She served on the Le Mans Sarthe Centennial Committee celebrating the first powered flight in Europe, achieved by Wilbur Wright in 1908. She also represented her family at Wright brothers’ events in France, Italy, the Netherlands, Germany and Brazil. She has served as a Wright family spokesperson many times at the Paris and Farnborough International Air Shows, beginning in 2003.

“I’m extremely proud to be able to share the Wrights’ legacy with people from around the nation and around the world, but also to share Dayton’s legacy — because I’m not sure that the Wrights could have done what they did if they hadn’t grown up in Dayton, Ohio,” she said.

Wright Lane graduated with a bachelor’s degree from Miami University and as a volunteer founded three children’s educational and social programs for her community’s schools in Cincinnati. She and her husband, Don, have two children, Brenden, a graduate of Stanford University who lives with his wife, Erin, in San Francisco, and Meredith, a doctoral graduate from The Ohio State University who lives with her spouse, Pablo, and their two children, Rehn and Grey, in Columbus.