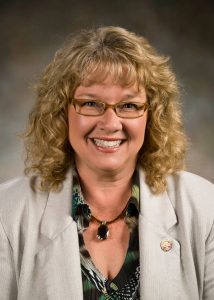 Ann Stalter, professor of nursing at Wright State University, was honored by the Association of Community Health Nursing Educators (ACHNE) for her contributions to public health and nursing education.

Stalter received the Outstanding Community/Public Health Nursing Education Award at the association’s 2019 Annual Institute, Culture of Health: Equity Thrives on Diversity in Phoenix in May.

The award honors an individual who contributes to the development of curriculum and research programs and whose work with those programs results in a change that has enhanced nursing education.

Stalter joined the Wright State College of Nursing and Health in 1998 as an adjunct clinical instructor. In 2009, she was named assistant professor of nursing and in 2011 was promoted to associate professor. Recently, she was promoted to professor of nursing. She has three degrees from Wright State: a B.S. in nursing, an M.S. in nursing administration and an M.Ed. in technology for health professions. She earned her Ph.D. in public health nursing from The Ohio State University.

Outside of teaching, Stalter is involved in several organizations. She is a leader on the International Quality and Safety Educating Nurses Task Force and an elected chair member of the Association of Community Health Educators Research Subcommittee. She also served as a consultant for the chief nurse of the American Red Cross in 2013.

Stalter has also been involved in several funded and unfunded research publications in the field of nursing and education. In 2017, she published “Systems Thinking Integration across Organizational Components of Magnet Facilities in the Midwest: A Descriptive Study.” Several of her articles have been published in the “International Handbook for Nursing Education.”

Stalter has facilitated the adoption of education technology by participating in both university and College of Nursing and Health technology committees. She has also introduced faculty to innovative online teaching strategies and willing shares her expertise by mentoring other faculty members.

She is well respected by her students and peers at Wright State and has received rave reviews from students who have taken her classes. One recent review said, “Great professor who really cares about her students. She makes herself very available outside of class hours and goes above and beyond. This is the second course I have taken with her and wish I could have had her more throughout my nursing education.”