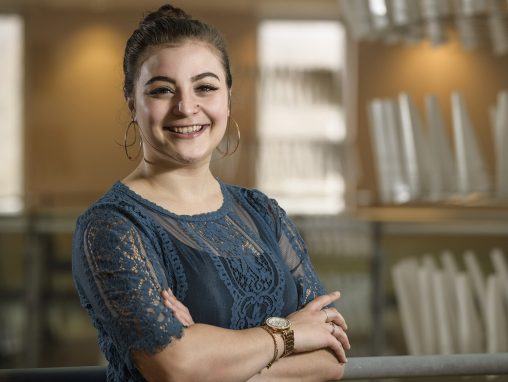 Gloria Pappaterra, who majors in political science and sign language at Wright State, was selected as a Newman Civic Fellow by Campus Compact. (Photo by Erin Pence)

Wright State University student Gloria Pappaterra believes she has a responsibility to get involved in her community by advocating for social justice and human rights.

A dual political science and sign language major, Pappaterra interprets for the Deaf, has helped raise funds for hurricane victims, has worked at a law firm that assists low-income people and works with a grassroots organization that strives to eliminate bias, bigotry and discrimination.

Pappaterra will have an opportunity to expand her activism as a Newman Civic Fellow, a prestigious one-year program for community-committed college students. Organized by Campus Compact, the fellowship program emphasizes personal, professional and civic growth for students who have demonstrated a capacity for leadership and an investment in solving public problems.

Pappaterra was encouraged to apply for the fellowship by Stephanie Patino-Garfias, a former Newman Fellow and Wright State alumna, and Lee Hannah, assistant professor of political science. Pappaterra said she views the fellowship as the next step she could take to better herself and her community.

“I’m constantly striving to be better, to think harder, to think more critically, to be more involved,” she said.

Pappaterra became interested in social justice issues when, as a senior in high school, she attended the Anytown program offered by the National Conference for Community Justice of Greater Dayton. Anytown is a youth leadership program for high school students focused on building an inclusive and respectful community.

“It changed my life,” she said.

After attending the Anytown program, Pappaterra started working for the organization and is now the assistant site coordinator for the program. She focuses on youth development, recruiting participants and building partnerships with other community organizations. She is interested in building empathy and encouraging dialogue to try to end ignorance, bigotry, discrimination and hatred.

“When you sit down and talk to people and realize their experiences are just as valid as yours that’s a powerful thing,” she said. “I think that is the way to bridge the gap. When we open ourselves up, we are allowing ourselves to be enriched by another person’s experience through a place of personal vulnerability. We force ourselves to view injustice through human connection.”

Pappaterra comes from a close-knit family, saying, “family is number 1 for me.” Her younger sister, Isabel, is a rehabilitation services major at Wright State. Her father is an electrical engineer originally from Puerto Rico and her mother is from Cuba and teaches Spanish in Springfield. Her mother lost everything when she immigrated to the United States. Pappaterra’s grandfather was a political prisoner when he was in Cuba.

Pappaterra was drawn to sign language by her father, who is Deaf. “Sign language is my first language,” she said.

She grew up watching him advocate for language access and equitable communication access and now works as an interpreter for two local organizations, often accompanying clients to doctor’s appointments, funerals and weddings.

“In the community’s most intimate moments, interpreters are there,” she said. “Many Deaf do not have the choice to not have interpreters in these settings. I am sure that most of us would not want an additional third person in our lives constantly, especially during our hardest and most trying times. I am reminded of this every day. It is a profession that that has opened itself up to me and has helped shape my worldview. It is incredibly humbling to see the world through a different lens and to work in such a resilient community.”

Working as an interpreter and having a father who is Deaf and a mother who speaks with an accent has exposed Pappaterra to injustices that many others face. Pappaterra pointed out that she has light skin so “people don’t look at me and think I’m a person of color.”

She says that this comes with barriers of its own and make navigating oppression a personal issue. “On the surface, my skin comes with privileges, but my deeply rooted identity and experiences tie me to oppression,” she said.

She says she has learned to understand that “not everybody gets the access they need and a lot of us take the opportunities — we take a lot for granted.”

In the community, Pappaterra has volunteered with LULAC (League of United Latin American Citizens) and Advocates for Basic League Equality, or ABLE. At Wright State, Pappaterra worked with the Office of Latinx, Asian and Native American Affairs and the Student Government Association to raise funds for and awareness of survivors of Hurricanes Irma and Maria in Puerto Rico.

She is also a member of the university’s Model United Nations team, served on the Social Justice Task Force and the Bias Incident Response Team and is involved in the Campus Vote Project, which helps students register to vote.

After graduating from Wright State in the spring of 2020, Pappaterra plans to attend law school and eventually work in politics. She is interested in getting involved in prison reform.

She is attracted to politics, she says, because she wants to serve people.

“While I’m here on this earth I’m going to leave a footprint, and the best way to do that is to go into politics because everything is politics,” Pappaterra said. “Your basic living needs are political. Understanding that led me to politics and has fueled my passion for social justice issues and human rights.”