Two students elected to Wright State Foundation Board of Trustees 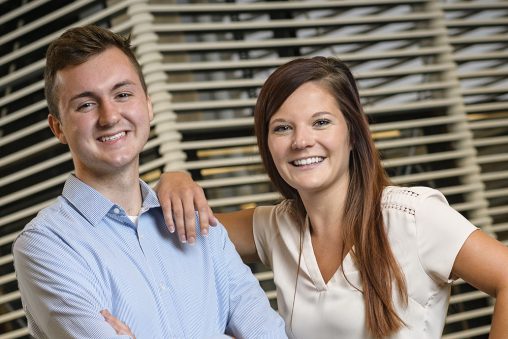 Aaron Brautigam, a human resources management major, and Sonja Wolf ’18, an MBA student, were elected to the Wright State Foundation Board of Trustees.

Sonja Wolf and Aaron Brautigam are the newest members of the Wright State University Foundation Board of Trustees after being elected by the full board in May.

The Wright State Foundation Board is made up of select alumni and other friends of the university and includes two seats for students each year. Board members also serve on several committees. Brautigam is a member of the Grants Committee, which focuses on the Students First Fund, a new endeavor that supports student success at Wright State. Wolf is a member of the Governance Committee and is tasked with finding new members to serve on the Foundation Board.

Both Brautigam and Wolf have goals of learning and excelling at their new positions, while also keeping the opinions of their fellow students in mind. Brautigam’s main goal is to continue to take the Students First Fund to new heights.

“I really want to focus on the Students First Fund,” Brautigam said. “I want to take that program and continue to help it grow and be successful.”

“I want to stand up for those who are not on the board and give students a voice to express their concerns and opinions,” Wolf said.

They are both involved in several campus organizations and employment opportunities. Brautigam served as a resident assistant (RA) in the Woods community last year and is currently an orientation coordinator in the Office of Orientation and Transfer Services. He also works for the admissions office. Wolf has worked as a tour guide on campus and has been involved in the HR and Management Club as well as Habitat for Humanity.

The opportunity to serve the university as members of the Foundation Board has both Brautigam and Wolf excited. Wolf said she “loves Wright State and is honored to serve the student body and community in this new way.”

Brautigam added, “I’ve worked with students on almost every level, from my time as an RA to my time now as an orientation coordinator. I am excited to represent students and make sure they are supported.”