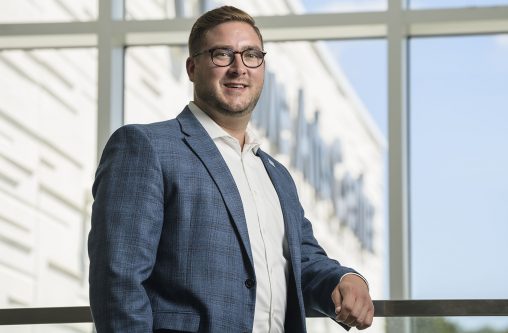 ArtsGala, Wright State University’s annual premier arts event and fundraiser, has a new face. Nick Warrington, a 2012 graduate who served as assistant director of alumni relations for the last five years, will oversee ArtsGala as the new director of events and community engagement for the Wright State College of Liberal Arts.

ArtsGala, which takes place every spring in the Creative Arts Center, has raised nearly $3 million in scholarships for fine and performance arts students. The event features delicious food and drinks, a silent auction and performances throughout the night from Wright State dance, theatre and music students and demonstrations from motion pictures and visual arts students.

Warrington said one of his goals is to attract more first-time attendees, including more young people, to ArtsGala. He said he is excited to work with his colleagues in the College of Liberal Arts and the ArtsGala host committee to find ways to enhance the experience of attendees.

“Anyone who is passionate about the arts should consider attending ArtsGala and supporting the College of Liberal Arts,” Warrington said. “Our students are the future of the fine and performing arts both here in the Dayton region and across the country. From New York to Hollywood, our music, theatre, dance, motion pictures and art students are leaving their mark in their industry.”

Through his work in the Office of Alumni Relations, Warrington got to know many students and alumni in the College of Liberal Arts and understand how Wright State has impacted their lives.

“To be able to represent a place that I’m so passionate about and bring in financial support for our students brings me a lot of internal joy and a lot of motivation,” he said.

“We are delighted to have Nick join us in COLA,” said Linda Caron, dean of the College of Liberal Arts. “He is an experienced event planner and volunteer coordinator and a passionate advocate for Wright State. I love his enthusiasm and energy and couldn’t be happier that Nick has joined Team COLA.”

Warrington, who attended ArtsGala numerous times, hopes to continue the tradition left by Jennie Buckwalter, who oversaw the event for many years. “I’m very thankful for a strong foundation and want to continue the legacy of excellence in ArtsGala,” he said.

Warrington’s responsibilities are not limited to ArtsGala. He also oversees the college’s student-alumni mentoring program, which connects students with professionals in their field; provides support to the Dean’s Leadership Board, which offers input on higher education issues; and organizes the annual College of Liberal Arts scholarship donor reception, which is on Oct. 10 this year.

Beyond that, Warrington hopes to immerse himself in the Dayton community to spread the word about the importance of a liberal arts education. “A liberal arts education challenges students to have a global understanding of themselves and the world around them,” he said. “It provides a foundation for so many different career paths in a world where they may feel they must hone in on a specific field.”

Warrington will also work closely with Colleen Lampton-Brill, the college’s new director of major gifts, to provide continuing support for liberal arts students. In addition, he will provide support to the college’s social media accounts.

Warrington received a bachelor’s degree in middle childhood education from Wright State in 2012. While at Wright State he was actively involved on campus in numerous leadership roles including vice president of the Student Government Association his senior year.

He then earned a master’s degree in educational leadership and policy studies from Virginia Tech, where he served as a student representative on the university’s Board of Visitors.

He returned to Wright State to work in the Office of Alumni Relations. “This is home to me,” he said.

Warrington said it’s been a great experience to work professionally with Wright State community members with whom he originally interacted as a student.

One of his favorite parts of his job with the Office of Alumni Relations, Warrington said, was meeting alumni across the country. Traveling as a representative of Wright State helped him meet many alumni from all areas of the College of Liberal Arts who have a strong affiliation with the college and Wright State.

Warrington said he’s excited to represent the College of Liberal Arts in the community and encourage others to see a Wright State theatre, dance or music performance; watch films by motion picture students; attend an event in Millett Hall; or check out an exhibition in the Stein Galleries.

“There’s just so much going on in the College of Liberal Arts,” he said.