Wright State students came together to march for climate change awareness and protest the use of fossil fuels.

The march took place on Sept. 27 on the Dayton Campus and Colonel Glenn Hwy. Students carried signs and chanted in their efforts to have their message heard.

Crumrine said one of the main goals of the march was to educate people who may not know much about climate change. 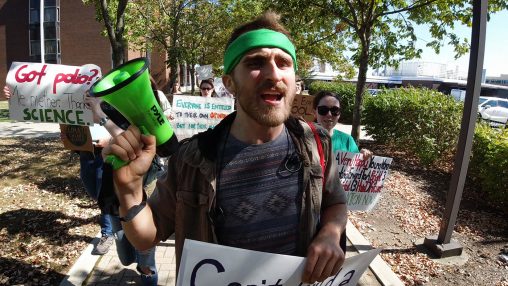 Wright State students were inspired to organize a march to educate people who may not know much about climate change. (Video by Kris Sproles)

“People in Ohio, we feel aren’t very educated on the issues,” he said. “There’s not really a voice to let them know what’s going on. We feel by giving that cause a voice it will lead to more action being taken.”

Their efforts brought numerous students out to the march and led to a conversation with a member of the Student Government Association about what can be done in the future on Wright State’s campus. One idea that was suggested was composting.