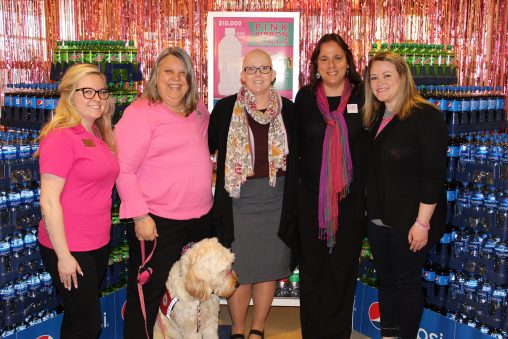 Wright State University Provost Susan Edwards says it was the university’s community support, as well as her family, that has been “life sustaining” during her breast cancer journey.

The native of Australia started her post at Wright State in July 2018. A welcome reception that September introduced her to the university’s students, faculty and staff. And shortly after in November, Edwards was diagnosed with breast cancer.

Given her visible role as provost, as well as executive vice president for academic affairs, Edwards said she sent an email to the community to share publicly about having breast cancer and undergoing treatment.

The support in the year to follow has been “overwhelming,” she said.

“And it never waned, and still to this day (the support) has never waned,” Edwards said. “The alumni, faculty, staff and students; I was truly held up by them.” 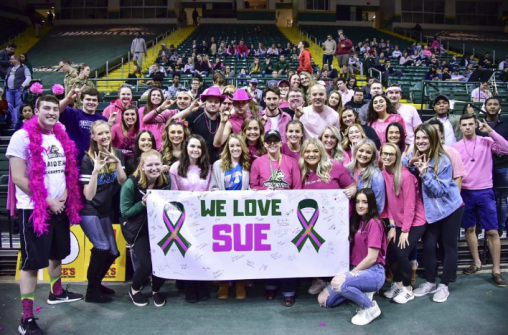 Wright State University students and the Department of Athletics show their support for Provost Susan Edwards during a basketball game last year. She says: “The students were off the charts; they’re the only reason I do this job. It was life sustaining.”

Edwards, who has had breast cysts in the past, said during her move to Ohio she had noticed an uncomfortable lump in her breast. She put it out of her mind — believing it was just the stress that comes with a move.

“A couple months went by,” she said. “I made an appointment with my physician at the time and she said, ‘This is not good.’ It was kind of a whirlwind from that time.”

“A lot of people do find themselves a lump which is why self check is so important,” she said.

Her final receptor treatment will be Nov. 22 — almost a year to date from her diagnosis.

“I was fortunate to have exceptional health care from Kettering Health,” Edwards said. “The care I received here was absolutely exceptional. From the doctors and nursing staff to the people that volunteer; the care was exceptional and you were treated like a human.”

Listen to your body

Throughout her year-long journey with breast cancer, Edwards said she only took a few days off work. For her, the work gave her an outlet.

“I never really went to a dark place,” Edwards said. “Work gave me a distraction from the illness.”

The day of Edwards’ surgery, she presented to the board of trustees in the hours before.

“The doctors did not want me to work but for me it was the right thing to do,” she said. “Listen to yourself and your own body. Understand your limitations.”

Sometimes a nap during the lunch hour would be all Edwards needed to sustain her the rest of the work day.

Edwards has a message for employers faced with an employee diagnosed with breast cancer: “It’s not the end of the world. … It’s just a hiccup; a bump in the road.”

“An employee can still function as an employee,” Edwards said. “People are the best commodity any business has.” 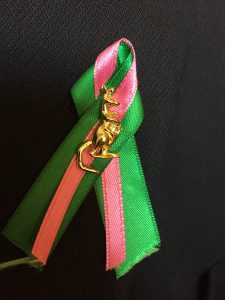 Many members of the Wright State University community wore a green and pink ribbon with kangaroo pin in support of Provost Susan Edwards during her breast cancer fight. The pins were made by administrative assistants in the Office of the Provost and the Office of the President.

For women in the U.S., 1 out of 8 (12%) will be diagnosed with breast cancer in their lifetime, according to the American Cancer Society.

“That is very daunting,” Edwards said.

After sharing her own cancer journey, Edwards said many people reached out to her about their own personal experience.

“You’d be amazed to know the number of people who’ve been through it and you have no idea,” she said.

And now nearing the one-year mark, Edwards is excited about the new academic year getting underway.

“My whole reason for becoming a provost is to provide support for academics and for every person to have an opportunity to move up as a result of education,” Edwards said. “(Education) is the keys to so many doors.”

Edwards says Wright State has faced its set of challenges in the last five years.