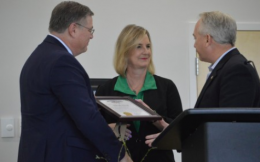 Started in August of 2018 and completed this past August, the expansion opens doors for education in several ways.

Looking to better an already strong local workforce, the Lake Campus felt the need to offer more ways to fill in-demand jobs with residents from Auglaize and Mercer counties. Ohio Department of Higher Education Chancellor Randy Gardner said that the completion of Tri Star 2.0 and the Andrew’s Hall expansion will work in harmony together to train the current and future workforce.

“Almost no place in Ohio does it better than this region,” he added.

The need for more places for students to study and learn was emphasized when the Lake Campus released its enrollment numbers earlier this year, reporting record enrollment of 1,679 for the fall semester.

Wright State University President Cheryl Schrader added that the new science facilities are the most technologically advanced facilities the university has to offer. She also commended the addition of the 2,560 square foot nursing simulation resource center for providing new and innovative ways to teach a program that has doubled in size in recent years.

Last to speak on behalf of the state was Auditor Keith Faber who has a special connection to the Lake Campus as it is next door to his Celina office. Faber said he was impressed with the expansion and said it is an outward expression of the university’s dedication to the area.

“This is such an asset to this community when it comes to jobs, economic development, changing lives and creating a stronger future for this area,” he said.

View the original story at theeveningleader.com