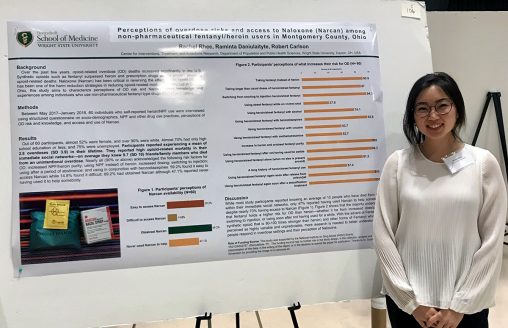 Research on addiction medicine has led third-year medical student Rachel Rhee to see the potential of working with that patient population after graduation from the Boonshoft School of Medicine.

Rachel Rhee, a third-year student at the Wright State University Boonshoft School of Medicine, has contributed to research into Narcan access among fentanyl and heroin users in Montgomery County. The study Rhee contributed to found that 60 percent of interviewed study participants reported easy access to Narcan; 70 percent have personally obtained Narcan; and about 50 percent used Narcan to help an overdose victim.

Rhee, who grew up in Orange County, California, and Columbus, Ohio, was inspired to study the issue after shadowing Marilyn Kindig, D.O., assistant professor of obstetrics and gynecology, at an addiction clinic in Lima, Ohio. Rhee and the physician consulted patients going through medication-assisted treatment, and she witnessed how it took a group of supporters to help patients through recovery.

“Hearing their stories and the challenges they faced made me realize that many of them were victims of substance use and, despite such traumatic difficulties, were fighting to live a better life,” Rhee said.

The experience inspired her to get in touch with Raminta Daniulaityte, Ph.D., professor of population and public health sciences, who has research interests in substance use epidemiology and behavioral research, specifically the illegal opioid use epidemic. Daniulaityte compiled survey responses from self-reported heroin and non-pharmaceutical fentanyl users from May 2017 through January 2018. The effort was supported with funding from the National Institute on Drug Abuse.

The surveys included responses from 60 individuals who answered questions on social demographics, fentanyl use, other drug use, perceptions of overdose risk and knowledge and Narcan access. Rhee considered participant knowledge and experiences of the overdose problem in the broader community and in their immediate social networks, allowing the study to better understand how people behave in overdose settings. 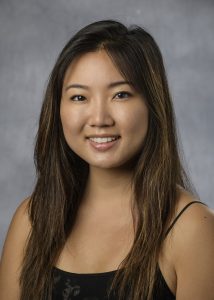 Rachel Rhee is interested in specializing in internal medicine or psychiatry.

The next step for the researchers is to show whether or not Narcan availability has led to fewer overdoses.

For Rhee, the experience working with addiction medicine has helped her to see the potential of working with that patient population after graduation. She is most interested in specializing in internal medicine or psychiatry.

“It’s through meeting inspirational people like Dr. Kindig and Dr. Daniulaityte that I have been able to understand what patients experience and what we can do from a public health research standpoint to initiate change and advocate for victims of the opioid epidemic,” Rhee said. “While the data I used for my research were from a few years ago, I believe that updated data will show positive change and that improved Narcan availability has made significant effects in reducing overdose.”