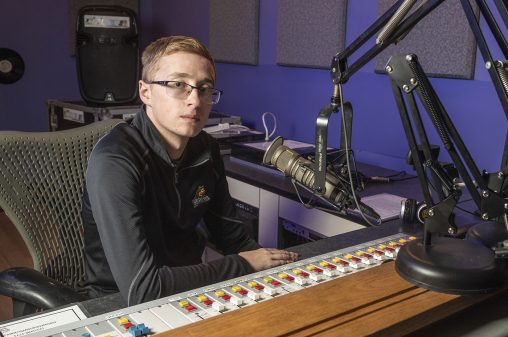 From an early age, Wright State University junior Shea Neal loved being involved with sports. Whether he was playing sports or watching them, he always enjoyed the competition and strategy.

During his time at Wright State, Neal has taken that love for sports and transformed it into a broadcasting career that has produced success for both himself and Wright State’s student-run radio station, WWSU 106.9 FM.

Neal was hired as the sports director at WWSU in the fall of 2018. Before that, he had been a host and producer for 1410 ESPN Radio in Dayton and also had some experience broadcasting Cincinnati Reds media events.

Neal says that upon joining WWSU he wanted to add a more engaging experience to live sporting events at Wright State.

“A few things I tried to implement in my time as sports director of WWSU is the addition of pregame, halftime and postgame shows for a more professional presentation,” he said. “Also, more interviews with athletes and coaches from every sports team on campus, athlete spotlights and social media interaction have been very important goals of mine to take to the next level over the past year or two here.”

These changes proved to be instrumental in increasing the audience of WWSU sports broadcasts. Since Neal became sports director, the ratings of WWSU’s live sports broadcasts have more than quadrupled.

Neal believes the growth of the team as a whole has been a huge reason for the station’s success.

“The most rewarding part of the success I’ve seen has definitely been the growth and development of my team,” he said. “My team of broadcasters have worked their tails off to improve their quality behind the mic, and it makes me so happy to see them succeed.”

Neal’s days as sports director are far from over, as he won’t graduate with his bachelor’s in mass communication until spring 2021. Once he does, he wants to continue to pursue a career in sports broadcasting. He hopes to one day host a sports television show on a major network like ESPN or Fox Sports.

Neal gives credit to Wright State and WWSU for allowing him to pursue what he loves doing in life while also giving him the opportunity to work with a group of amazing people.

“WWSU and Wright State have impacted my life in countless ways,” he said. “Most importantly, this station and this school have allowed me to find some of my best friends in life, who push me to reach my full potential, who support me when I’m having a bad day and who I know will be cheering me on throughout life no matter what happens, as I will for them.”

To hear Neal live, catch his radio show “On the Horizon” on WWSU 106.9 FM on Fridays from 1 to 2 p.m. He covers all the latest topics in Wright State sports, as well as provides interviews from coaches, players and more.