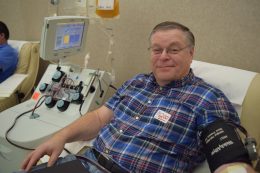 Interim Lake Campus Dean Dan Krane is among the rare 0.6 percent of people with AB-negative blood.

Wright State University’s Dan Krane is an AB-negative donor, the rarest of all blood types and the universal donor for platelets and plasma.  He gave platelets for his milestone 200th lifetime donation Jan. 10 at the Dayton Community Blood Center (CBC), so you can say helping save lives “is in his blood.”  But it’s also in his DNA.

Krane now has 200 donations with the CBC, but he has several more from his time in Massachusetts where he did post-doctoral research at Harvard University and began donating platelets. “When I started, it was the two-arm procedure,” he said.

Krane is among the rare 0.6 percent of people with AB-negative blood. “I have a pretty good platelet count as well,” he said. “I do doubles (double platelet donations) all the time.”

He considers that his “Donor for Life” journey truly began when he was a 10-year old boy, growing up in Cleveland, and enjoying the snow on New Year’s Day.

“I had a sledding accident and needed donations, so that motivated me,” Dan said. “I hit a tree and the sled kicked-back, struck me in the middle. I needed eight units of blood. I lost my left kidney and spleen. That’s why I have such a high platelet count.  When you see very high platelet counts, the person is very often asplenic.”

Biology tells us the spleen is responsible for removing damaged platelets and therefore removal of the spleen can help to keep more platelets circulating in the body. That knowledge comes easy to Krane who has taught biological science at Wright State University since 1993.

He has been elected president of the Wright State Faculty Senate four times and was recently named interim dean of the 1,600 students at Wright State’s Lake Campus in Celina. He commutes from his home in Xenia.

A passion that rivals even his dedication to blood donations, is his study of DNA. He is one of the world’s foremost DNA authorities and has testified as an expert witness in more than 100 criminal trials.

Since 2002 his consulting company, Forensic Bioinformatics, has reviewed hundreds of court cases from around the world and used the data to develop computer-based tools to make forensic DNA profiling more reliable and objective.

“We were the very first successful start-up company at Wright State,” he said.

He has been involved as an expert witness in some of the highest-profile criminal cases, including prosecutions of the “Unabomber’ Ted Kaczynski, the Washington D.C. sniper, and O.J. Simpson.

“That was a rare case where we did work for both the defense and the prosecution,” he said.

As he made his 200th donation he catches up on emails about a new case in need of his expertise. “There’s a person in the Netherlands who wants us to work on his case,” he said. “It was a murder. It’s been dismissed, but he wants to clear his name.”

Before completing his milestone, Krane got to enjoy what he considers one of the rewards of his monthly platelet donations at the CBC. “I love the time to read a book,” he said.