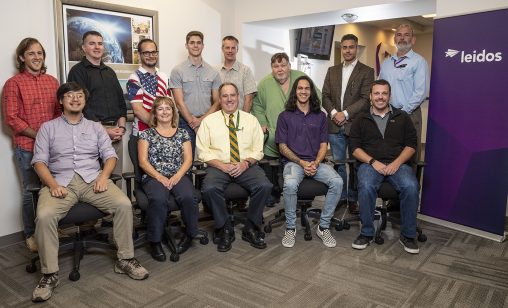 Nearly 100 Wright State graduates work out of the Beavercreek office of Leidos, which has nurtured a pipeline of talent from the university.

When E Comte interned at Leidos, he not only gained real-world experience, he landed a full-time job after graduation.

“As soon as I started here, I felt like I was doing real work,” said Comte, who began interning at Leidos in May 2017. “That really prepared me for what it’s like to be a software developer. I was doing stuff that everybody else was doing. It’s hard getting thrown into it like that, but it was nice to experience that.”

By the time Comte graduated from Wright State University in May 2019 with a bachelor’s degree in computer science, he knew he had a job waiting for him as a junior software developer at Leidos.

Comte is one of nearly 100 Wright State graduates who currently work out of Leidos’s Beavercreek office. Thanks to a strong partnership between Leidos and the university, Comte won’t be the last Raider to join the global, 33,000-employee Fortune 500 company. In today’s highly competitive job market, Leidos has nurtured a pipeline of talent from Wright State.

“Leidos’s partnership with Wright State University has been a central factor in our continued success and growth in Dayton,” said David A. Burke, Leidos vice president and division manager. “Our partnership provides us the opportunity to build long-term relationships with students so that they are fully engaged on day one. With Wright State, we have also been able to build a more diverse workforce, which is critical for being innovative and responsive to today’s dynamic environment.”

As president of Wright State’s student chapter of the National Society of Black Engineers (NSBE), Alliah Turner has witnessed Leidos’s commitment to diversity firsthand. Through its Strategic University Alliance Program, Leidos helps support multiple student organizations across campus that promote diversity in the STEM fields. Wright State is one of 15 universities nationwide that are part of Leidos’s Strategic University Alliance Program.

Thanks to Leidos, several students in Wright State’s chapter have been able to attend regional NSBE conferences and the annual convention. Turner said that 70% of the NSBE members who attended those conferences walked away with full-time jobs or internship offers.

“Without Leidos, Wright State’s NSBE chapter wouldn’t be able to travel to these conferences and experience some of the amazing connections that are made there, or successfully put on some of our more important events,” said Turner. “Leidos is the major contributor to the success of our organization, and I don’t think that we could make each year possible without their help.”

Leidos has also sponsored the annual Innovation Weekend, organized by the College of Science and Mathematics, where Leidos staff provide a significant, real-world problem for students to solve. They also mentor the students as they formulate their solutions.

“Leidos has been a fantastic partner in supporting student innovation and entrepreneurship,” said Douglas Leaman, former dean of the College of Science and Mathematics who is now serving as interim provost. “The value that this adds to the academic life of participating students is readily apparent, and I hear from participants almost weekly about how the opportunity positively impacted their student experience at Wright State.” 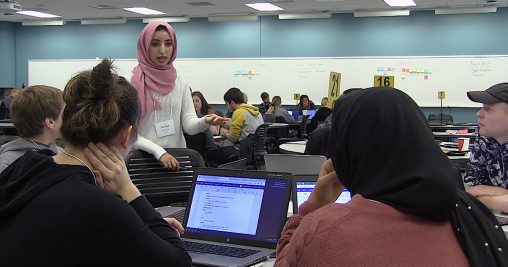 Leidos has sponsored Wright State’s Innovation Weekend, organized by the College of Science and Mathematics, where Leidos staff provide a real-world problem for students to solve.

For longtime Leidos employees Jennifer DeVilbiss and Jim Hopper, the collaboration between higher education and corporate America reflects how the job market has evolved over the years.

“Companies now have more relationships with universities,” said DeVilbiss, a senior software engineer and two-time Wright State computer science graduate. “We’re all fighting for the same talent. There is a lot more work and not enough people.”

The competitive job market has also spurred a more diverse workforce and classroom. Hopper, who graduated from Wright State in 1978 with a bachelor’s degree in physics, can remember being in physics classes with only one female student.

“I’m amazed at how many women there are compared to when I was there,” said Hopper, principal systems engineer at Leidos, who returns to campus periodically to take graduate courses in physics. “Now, there are probably 30 percent. The number of women in physics is way up.”

For Leidos control engineer Adam Dickson, it simply makes good business sense for Dayton-area corporations and higher education to work together to keep their best talent at home.

“Dayton has had a huge problem with brain drain, but it’s starting to slow,” said Dickson, a 2001 alumnus of Wright State’s electrical engineering program.

To keep the best and brightest in the Dayton region, Wright State has an obligation to educate students that are well prepared for the workforce — both before and after they graduate.

Benjamin Mostyn, who works as a product liaison for Leidos’s intelligence surveillance and reconnaissance portfolios, is impressed with the talent he’s seen coming out of Wright State.

“They’re sharp. They’re hungry. They’re learning all of the new technologies,” said Mostyn. “They have performed quite well.”

Mostyn recalled one Wright State intern who figured out how to automate some of Leidos’s documentation, such as installation and user manuals. The intern built a prototype within a week, and the company still uses it today.

Internships have come a long way since senior systems engineer and two-time Wright State graduate Paul Hannen was in college. Hannen remembers a time when summer interns did nothing more than just help out with random tasks around the office. Today, summer interns get hands-on, real-world experience.

“We hand them a project and they come back two and a half months later. Nine times out of 10 the project is done,” said Hannen, who also serves as adjunct faculty in the Department of Electrical Engineering. “We’re using software packages that were developed by interns. They’re doing actual, honest-to-God work.”

With a win-win partnership that benefits both Wright State and Leidos, this ongoing collaboration seems like the perfect match.

“Leidos shares our commitment to building a skilled workforce, as well as our focus on inclusion and diversity initiatives that engage underrepresented students in engineering and computer science,” said Brian Rigling, dean of the College of Engineering and Computer Science. “We are grateful for Leidos’s continued partnership, and we believe it is a model for how higher education and corporations can work together toward common goals.”