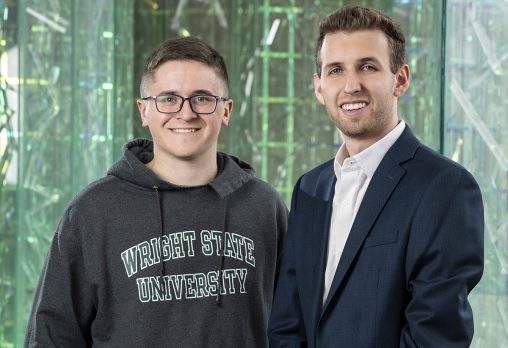 Wright State seniors Zack Carpenter, left, and Matt Barrett received scholarships from the the National Training and Simulation Association and funds to attend the Interservice/Industry Training, Simulation and Education Conference in December.

Thanks to the National Training and Simulation Association (NTSA), two Wright State University students have received much-needed help with their tuition, along with an invaluable opportunity to attend a national conference.

Matt Barrett, a senior computer science major, and Zack Carpenter, a senior psychology major, both received a $5,000 scholarship from NTSA and an all-expenses-paid trip to the Interservice/Industry Training, Simulation and Education Conference (I/ITSEC) in Orlando, Florida, in December 2019.

For Carpenter, who wasn’t sure how he was going to pay for his next — and final — semester at Wright State, the scholarship was a godsend.

“It was the perfect time to receive a scholarship,” he said.

Both Carpenter and Barrett are grateful for the opportunity to attend the I/ITSEC conference. They both acknowledge that they would have never been able to take part in the conference without the support from NTSA.

“Being scholarship awardees, we were able to go to different events and meet all of these incredible people,” said Barrett. “That opened doors that we would not have had opened otherwise. If not now, that will really help us later in our careers.”

The conference showcased technology from companies around the globe and highlighted the latest efforts in military training simulations.

“It’s focused on collaboration with government, industry and academia,” Barrett explained. “It’s truly a melting pot of all different backgrounds focused on how they can better train and equip men and women for combat.”

Carpenter, who has been working on his undergraduate honors thesis with Herbert Colle, professor of psychology, enjoyed learning about the work of conference participants and seeing how it applies to his own research on spatial memory.

“It was really cool for me to be able to talk about some of the stuff that I’m doing,” said Carpenter. “They’re all doing similar stuff. It was interesting to see what everybody is working on.”

Barrett spent two years working at Wright-Patterson Air Force Base on training applications using virtual and augmented reality. This technology allows a trainee, such as a new aircraft maintenance worker, to learn how to do repairs or maintenance without actually touching the aircraft.

“It’s all virtual so you’re not going to harm anything,” said Barrett. “It saves money and makes technicians more confident when they actually put their hands on the aircraft for the first time.”

Barrett is also collaborating with Derek Doran, associate professor of computer science, on a research project that examines whether 3D environments are more effective in examining large sets of data.

At the I/ITSEC conference, Barrett and Carpenter were both surprised to learn about the extent of the training and simulation industry.

“I didn’t realize the breadth of the field,” said Carpenter. “That was really eye opening for me.”

The conference also reinforced the need for young talent in the fields of training and simulation and the many job opportunities the industry affords.

“The area is growing incredibly fast,” said Barrett. “I knew I wanted to work in this domain before, but this conference made it a very easy choice and really put me into that career field.”

Carpenter, who will graduate in December 2020, plans to go on to graduate school and eventually earn a Ph.D.

“I’m really interested in education and learning,” said Carpenter, who is especially passionate about helping people learn in different environments and social groups.

Barrett will graduate in May 2020 and begin working in software development for a government contractor. He plans to start taking classes for his master’s degree in computer science on a part-time basis this fall. He is also considering getting a doctorate down the line.

Both students had words of praise for their time at Wright State.

“I’ve had a great experience here. The professors are amazing,” said Carpenter. “The education you get here is really solid. It has prepared me for what I want to do in the future.”

Barrett is especially grateful that he was able to get real-world experience as an intern as Wright-Patterson Air Force Base.

“I wouldn’t have had the same opportunities somewhere else, because no one has the same partnerships that Wright State has with Wright-Patterson Air Force Base,” he said.