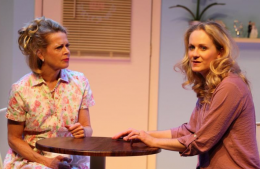 Newly formed The Virtual Theatre is the latest troupe to seek solace in the internet.

The brainchild of 2007 Wright State University acting graduate Matt Neal, The Virtual Theatre arose last month out of a common desire for artists to create in these difficult times.

“I needed enrichment,” said Neal, who has staged musicals at such summer-stock venues as Bigfork Summer Playhouse and appeared in such WSU productions as “Ragtime” and “The Elephant Man.”

“I was feeling overwhelmed and bored from being in the house every day. I’ve also lost some work, just like everyone else. So, I wanted to create something. I leaned on my friends and we leaned on each other. We all had the same need. Despite feeling overwhelmed, bored and unsure, we still wanted to tell stories.”

To launch The Virtual Theatre, which consists of Zoom readings, Neal turned to the beautiful poetry and thrilling drama of Tennessee Williams, specifically “The Glass Menagerie,” “A Streetcar Named Desire” and “Cat on a Hot Tin Roof.” He reached out to the Williams estate, which gave permission to stream the readings as long as they were free and no money was issued or raised. Actors’ Equity allowed a handful of actors to participate as there is no union work to offer and no money was exchanged. He acquired talent regionally, as well as from New York City, Chicago, Nashville, Denver and Atlanta.

“We could have chosen (material) that dealt with quarantine or quarantine-related themes, but we went with classic material instead,” Neal said. “It’s grounded in the past but still felt relevant. Williams’ plays are familiar stories with familiar characters, (which) is comforting. All these characters are going through some sort of monumental isolation or loneliness internally in different ways and while it is not directly related to a quarantine or medical issue hopefully people can relate to their situation.”

Along with co-director and co-producer Amy Mirlisena, Neal spearheaded an inaugural streaming of “The Glass Menagerie” on Saturday, April 25, featuring WSU acting graduate Ryan Imhoff’s expressive portrayal of Tom Wingfield. He was pleasantly surprised to have received such a strong response.

“There’s no real data about (virtual) productions,” Neal said. “Our hope was to get 1,000 views, the (equivalent) of being able to fill a very large theater over the course of one week and that would be valid enough that we would be able to keep doing this. But we hit 2,000 views in less than three days.”

“‘Glass Menagerie’ had a really good turnout,” said Imhoff, who previously portrayed Tom at Milwaukee Rep and appeared in the Human Race Theatre Company’s production of “Lombardi.” “The cynic in me is not ideal – I hope it’s not like this forever. But in the meantime, Matt, who is a great director, has hit on something special. People have responded. I’m grateful he decided to create something like this to keep actors busy during this time. It was strange to talk to an actor through a screen but to give the illusion we were really in the same room together became more of a question of relying on the words and technique to (grasp) the human-to-human connection.”

Through Saturday, May 16, The Virtual Theatre is streaming “A Streetcar Named Desire” featuring WSU acting graduate Claire Kennedy as Blanche DuBois. Kennedy memorably appeared earlier this season as Jen in the Human Race’s outstanding regional premiere of “The Cake.” “Cat on a Hot Tin Roof,” which is co-sponsored by Culture Works, will stream beginning Sunday, May 16, at 8 p.m.

“I chose ‘Cat’ because it’s the closest play Williams (wrote) that comes with the feeling of being cooped up with someone,” Neal said. “The humor of the show evokes the feeling of knowing what it’s like to be locked in a bedroom with someone for a week straight and really wishing they could go somewhere else.”

Neal acknowledges The Virtual Theatre flows between the realms of stage and film, especially since he allows his actors multiple takes. He is also adapting to the learning curve within the Zoom context, particularly regarding technical issues. Still, he’s hopeful the company will continue to fill a much-needed void.

“We want to tell a story in a new way, a valid way, a cohesive way,” Neal said. “I want Virtual Theatre to grow however it can. We had an idea to use the Zoom platform and in a stroke of luck we had good response. We want to move forward with fully licensed productions, offer another series and have continued legitimacy as a theatre. We want to be able to pay our performers as well and have a full production company. There’s going to come a time when Gov. DeWine says 100 people or more can gather again and when we get there that will be great. But to be honest, I’m not sure how many people will want to go out and pay $60 or $70 to sit next to other people. They might do it for free.

“But in the meantime, I hope the Virtual Theatre can see something that evolves in what we’re doing right now, moving from doing stories on Zoom to perhaps doing some site-specific things in which we’re able to work the audience into the (action) while also ensuring it will be safe but also fun and new. I hope people will support us as we evolve in our goal until we get back to live performances.”