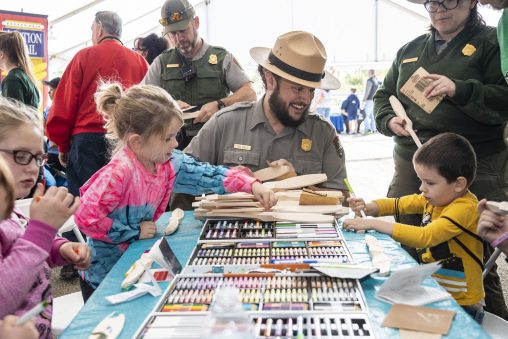 The inaugural event, which was held in October 2019, welcomed more than 4,000 visitors to Wright State’s Dayton Campus.

The 2020 Festival of Flight, which was scheduled to be held on Wright State University’s Dayton campus in September, has been postponed until 2021. The date of next year’s event remains to be determined.

Greg Scharer, executive director of alumni relations for Wright State and co-founder of the Festival of Flight, cited several reasons for canceling the 2020 event.

“Our committee and sponsors felt that it was necessary to postpone out of an abundance of concern for the health and well-being of our attendees, volunteers, performers, vendors and exhibitors,” he said.

The inaugural event, which was held in October 2019, welcomed more than 4,000 visitors to the grounds of Wright State Nutter Center.

“The most impactful areas of the Festival of Flight last year were the ‘hands-on’ educational areas for children,” Scharer said. “Our staff, sponsors and volunteers all agree that they wanted to protect the health of all the K–12 students who attended and engaged in such things as flight simulators, wind tunnels, balsa wood gliders, virtual reality, parachutes and drones.”

Post-event surveys indicated that the most popular part of the last year’s festival was the education area.

“It would be impossible to continue the hands-on education and innovation portions of the festival, which is the event’s core mission, and comply with the State of Ohio’s guidelines on fairs,” Scharer said.

Festival organizers also canceled out of respect for struggling local businesses that financially support the festival.

The festival and the National Aviation Hall of Fame had planned to partner in 2020 by including Hall of Fame Enshrinement activities in this year’s event.