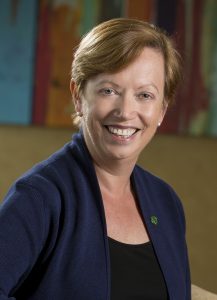 Margaret Dunn was named dean of the Boonshoft School of Medicine in 2015.

Margaret Dunn, dean of the Boonshoft School of Medicine, will retire after nearly 40 years of service to Wright State University.

Prior to assuming the position of dean, Dunn served as executive associate dean, associate dean for faculty and clinical affairs, and surgery clerkship director.

From 2007 to 2013, Dunn also served as president and CEO of Wright State Physicians. She played an instrumental role in the creation of the Wright State Physicians Health Center on the Dayton Campus, providing needed medical care to students and Raider Country residents, as well as helping to retain outstanding medical faculty and staff in support of clinical, research and community service activities.

She joined the Wright State University School of Medicine as a faculty member in the Department of Surgery in 1982. She was the first woman on the surgery faculty and one of the few women faculty members in the medical school at that time. Although the surgery department was located at Kettering Hospital during this period, Dunn spent most of her time at the Dayton Veterans Affairs Medical Center.

She was a founding member of the Association of Women Surgeons and has served as the organization’s president. In 2012, she received the association’s Nina Starr Braunwald Award in recognition of her contributions to the advancement of women in surgery. She was also in the charter class of the prestigious Executive Leadership in Academic Medicine (ELAM) program for women in medicine and was selected for an ELAM Fellowship at Hahneman University in Philadelphia in 1995. She is also a Fellow of the American College of Surgeons and served on its Board of Regents.

Dunn has received numerous teaching and research awards, including the Wright State Academy of Medicine’s Award for Excellence in Medical Education and Research.

She received a Bachelor of Science from Pennsylvania State University and an M.D. from Jefferson Medical College in Philadelphia. She completed her surgery residency and served as chief surgical resident at Einstein-Montefiore Medical Center in New York City. She also earned an M.B.A. from Wright State.

After her retirement from the university, Dunn will continue to practice breast surgery through Wright State Physicians.

Brenda Roman, associate dean of medical education, will serve as interim dean of the School of Medicine while Wright State conducts a national search for a permanent dean. 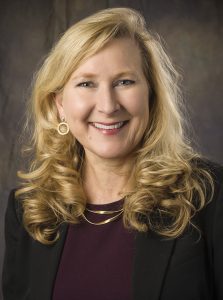 Brenda Roman, associate dean of medical education and professor of psychiatry, will serve as interim dean of the Boonshoft School of Medicine.

She has extensive experience with medical school curriculum, introducing Team-Based Learning into the psychiatry curriculum and working to introduce Peer Instruction and a unique brand of problem-based learning (WrightQ) to the overall curriculum.

Roman received the Leonard Tow Humanism in Medicine Award, the Faculty Mentor Award, Lifetime Achievement Award, and the Excellence in Medical Education Award from the Boonshoft School of Medicine.

Her clinical work has focused on the college and homeless populations, in addition to those with serious mental illnesses.

She is president of the Alliance of Clinical Education; faculty and mentor for the Leadership Education and Development Program for the Central Region of the Association of American Medical Colleges (AAMC); and chair-elect of the Undergraduate Medical Education Committee of the Group on Educational Affairs of the AAMC.

Roman received the Laureate Award from the Central Group on Educational Affairs of the AAMC in April. She also completed the ELAM Fellowship, is a Distinguished Fellow in the American Psychiatric Association and received the Roeske Certificate of Recognition for Excellence in Medical Student Education.

Roman received her Bachelor of Arts from Wartburg College and her medical degree from the University of Nebraska Medical Center. She completed her residency in psychiatry at the University of Cincinnati Hospital system.