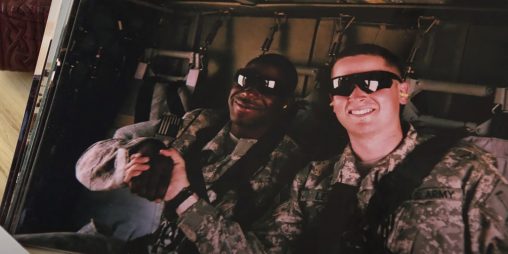 The documentary features Wright State student-veterans and veterans from the community and their families, exploring their time in the service and lives as civilians. The film also involved numerous students who appear on screen and behind the camera.

“Veterans Voices: Lives and Stories” will be screened online for free at 6:30 p.m. on Tuesday, Oct. 6, and Wednesday, Oct. 14. A link to watch the film will be emailed to those who register prior to the screening. Register to watch online.

“Veterans Voices: Lives and Stories” was produced in 2019 through a partnership between the New Media Incubator and the Veteran and Military Center. The project was led by the co-directors of the New Media Incubator, Ashley Hall, associate professor in the Department of English Language and Literatures, and Jen Ware, associate professor of communication, and Seth Gordon, director of the Veteran and Military Center and the Student Retention Team.

The Veteran and Military Center created the Veterans Voices Project as a way to connect Wright State student veterans with local veterans by interviewing them about their military service.

Interviews are sent to the Library of Congress, archived on Wright State’s CORE Scholar and shared on the project’s Facebook page and YouTube channel. The project has also included a series of stories produced by and featuring Wright State student-veterans on WYSO Public Radio.

Numerous Wright State students helped produce the documentary by interviewing veterans and others who appear in the films, recording and editing the interviews, creating social media posts, and coordinating logistics and production issues.

“Veterans Voices: Lives and Stories” is made possible in part by Ohio Humanities, a state affiliate of the National Endowment for the Humanities. Funding from the Ohio Humanities helped support the work of the students who contributed to the project.