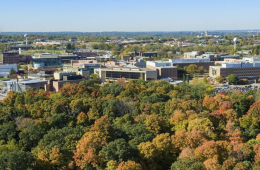 A recent agreement between Wright-Patterson Air Force Base and Wright State University is setting the stage for what participants hope will be fruitful joint research work.

One project made possible by the agreement: The Air Force Research Laboratory, based at Wright-Patterson, is partnering with Wright State to better understand the stresses that pilots and airmen endure as they perform their missions.

The base and the university recently signed a “cooperative research and development agreement” to advance a “multi-organ system model” that will accurately identify the impact those stressors have on human beings.

The duration of the agreement, also called a “CRADA,” is 24 months.

“This will allow for far greater collaborations,” said Dr. Jeffrey Travers, professor and chair of Wright State’s Department of Pharmacology and Toxicology and professor of dermatology.

The research into stresses will take place at the “basic science level,” looking at what airmen endure and how they can be supported, Ott said.

Research on human subjects isn’t planned just yet, he said. But the hope is they are the ones who will ultimately benefit.

Military environments quite often are anything but pristine, he said. Members of the Air Force can be exposed to jet fuel, for example. Sometimes military installations burn their own trash. Service members can undergo extremes of heat and cold. They may be exposed to air particulate pollution from jet engines and to UV radiation.

That’s right — even sunburn is a concern, Ott said.

“That may be a generic thing that people lose sight of, but (the university) has some good models for burns that maybe we can introduce a (new) sunscreen or something hangs around a little bit more permanently than sunscreen,” he said.

The bottom line is that researchers from Wright State and the base will be working together, exchanging ideas and information. Base personnel could be involved with the training and mentoring graduate students, Travers said.

The CRADA is a cooperative agreement, not an exchange of money, Ott said. Wright State will provide work space. The base will bring in equipment to be used in the projects.

The work will start small, with perhaps three to five base personnel on hand at the university. COVID-19 continues to be a concern, Ott said.

Cooperation between Wright State and Wright-Patterson is nothing new. But as Travers as sees it: What’s special about the CRADA grant is putting base personnel physically on the Wright State campus, in university research buildings.

“It’s just a small group who is going to be there, but the significance of this is that there’s nothing better than having people seeing each other, working together, instead of having this wall between the base and Wright State,” Travers said.

This agreement puts that long-standing relationship on a “new level,” he added.

“If you think about it, science is the ultimate team sport,” he said. “The days of the single scientist working by themselves in a lab — those days are long past.”