She watched her parents do it — immigrate to the United States from their native Mexico with very little and build successful businesses. Now she’s doing it herself.

Jazline Gomez, a 23-year-old Wright State University psychology and Spanish major, is the owner of Pepe’s Mexican Flavors, an authentic Mexican restaurant that features everything from street-style tacos to corn on the cob coated with mayo, cotija cheese, cayenne and lime to mango ice cream with chili pepper and coconut.

“It’s a very unique place,” said Gomez. “If you ever go to Mexico, you’re going to see a lot of street vendors. I decided to put that in one place. We make a lot of different ingredient recipes and you can customize a lot of things. I wanted that place where if you had a craving, you know where to go.”

Gomez opened the restaurant in 2018. Tucked in a shopping center in Huber Heights, Pepe’s was named after Gomez’ father, who owns several restaurants and stores in the area.

“I’ve had great role models. I’m from a family of entrepreneurs,” said Gomez.” “I grew up in that type of environment. I was working when I was very young.”

After helping at her father’s business and building up her savings, Gomez decided to open her own restaurant. 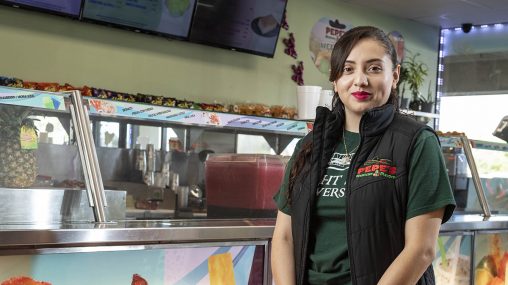 Jazline Gomez, who majors in psychology and Spanish at Wright State, named her restaurant, Pepe’s Mexican Flavors, after her father.

“It was hard work, but I’ve had a lot of support from the community,” she said. “Their support is making an enormous impact on us. We’re doing pretty well.”

Gomez is originally from Chicago and grew up in the Dayton area. After graduating from Wayne High School in 2016, she became a first-generation college student, enrolling at Sinclair Community College.

After earning her associate degree in psychology, she transferred to Wright State, where she is majoring in psychology and Spanish.

Gomez had considering going away to college and had visited other campuses. But many of her classmates had transferred to Wright State.

Gomez said the support of counselors and faculty made for a smooth transition. She felt also very welcomed by the Office of Latinx, Asian and Native American Affairs.

Gomez wants to eventually pursue a master’s degree in counseling after earning her bachelor’s degree in psychology.

Gomez said it has been a difficult year for her business dealing with restrictions imposed due to the COVID-19 pandemic.

“But we’re making it work,” she said, adding that she hopes to open more locations soon. “It’s a family environment, but it’s also a place where you can go and study. It can be someplace where you feel at home.”