David B. Shuster honored for improving quality of life for people with disabilities 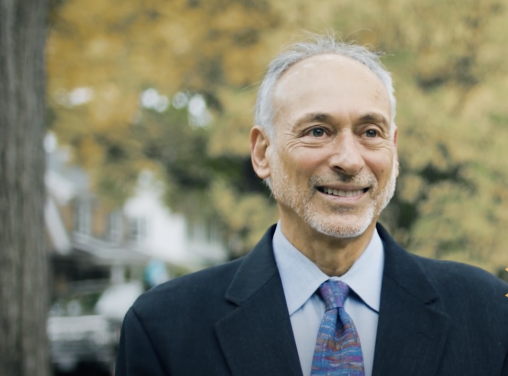 David Shuster is director of the Medicine and the Holocaust course and clinical assistant professor in orthopaedics and plastic surgery.

David B. Shuster was presented with the 2020 Erin Ritchey Educator Award during the 31st annual Erin Ritchey Memorial Awards celebration, sponsored by the Montgomery County Board of Developmental Disabilities Services in Dayton. The 2020 awards ceremony was held virtually in November.

Shuster, an instructor with the Wright State University Boonshoft School of Medicine since 1990, is currently director of the Medicine and the Holocaust course and clinical assistant professor in orthopaedics and plastic surgery. Shuster also has a private medical practice in Kettering, where he specializes in electrodiagnostic medicine.

The Erin Ritchey Memorial Awards recognize an individual or group whose personal and professional efforts have contributed significantly to improving the quality of life for people with developmental disabilities. The awards were founded in 1989 by Kenneth and Nancy Ritchey as a tribute to their daughter Erin.

Shuster was nominated for the award by the team at Stillwater Center in Dayton, a home that provides residential services and support for children and adults in Montgomery County who have significant medical needs and intellectual and developmental disabilities (IDD).

“Dr. Shuster is educating fourth-year medical students at Wright State University Boonshoft School of Medicine about IDD,” Carol O’Neill, Stillwater Center respite and residential program manager, wrote in the award nomination. “He has brought these students to Stillwater Center for years to learn about and interact with people with IDD.”

Students visit the Stillwater Center as part of the Medicine and the Holocaust course, which Shuster has been the director of for the past five years. Shuster says bringing students to Stillwater Center allows them to have “an interactive experience” with people who have IDD in what he calls the “Stillwater Experience.”

The course’s popularity is growing.

“What began with eight students now has an enrollment of over 40,” Shuster said.

Shuster noted that the Holocaust began with physician-assisted euthanasia of people with severe disabilities. His Medicine and the Holocaust course challenges students to think about humanity and the value of every human life.

When students interact with people with IDD, Shuster says they develop empathy for them by becoming exposed to their situation, feelings and needs.

“It’s more than walking in their shoes; it’s about climbing in their skin, feeling what they feel and acting accordingly,” Shuster said. He said developing this type of empathy toward people will help students in their future careers as physicians provide more appropriate and compassionate care.

Shuster’s efforts are aimed at giving future physicians not only a deeper understanding of people with IDD and their needs, but an education about the tragedies of the Holocaust and a reminder that every life is meaningful.

“Hopefully, the Stillwater Experience gives students a deeper insight into the humanity we all share,” he said.