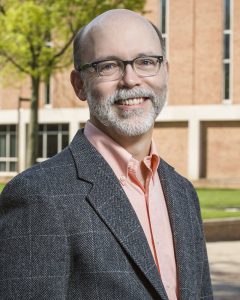 Barry Milligan, vice provost for academic affairs and dean of the Graduate School.

“Dr. Milligan brings a great deal of experience and expertise to the position,” interim Provost Oliver H. Evans said. “He will continue to work closely with academic and administrative units across the university to ensure compliance with state and regional accreditation standards and maintain Wright State’s proud tradition of providing a high-quality education.”

Since October 2017, Milligan has served as the interim dean of the Graduate School.

During this time, he accomplished a great deal, including implementation of electronic systems to replace many paper-based processes, working with Faculty Senate to bring graduate faculty credentialing policies and procedures into compliance with changed HLC standards, and transitioning graduate education governance from the Wright State Graduate Council to four Faculty Senate committees.

Milligan joined the Wright State faculty in 1994 as an assistant professor in the Department of English Language and Literatures. He was promoted to associate professor in 1998 and full professor in 2004.

He served as director of graduate studies in the Department of English Language and Literatures from 2009 to 2012, interim department chair in 2012 and then associate chair from 2013 to 2017.

Milligan’s area of specialization is 19th century British literature and culture. He has taught throughout the English department’s undergraduate and graduate curricula, including several courses cross-listed with history.

His publications include “Pleasures and Pains: Opium and the Orient in Nineteenth-Century British Culture” and the Penguin Classics edition of Thomas De Quincey’s “Confessions of an English Opium-Eater and Other Writings,” as well as a co-edited essay collection and a number of book chapters and journal articles.

Milligan received his Ph.D. and master’s degree, both in English, from Duke University and his bachelor’s degree in English language and literatures/letters from the University of Colorado.