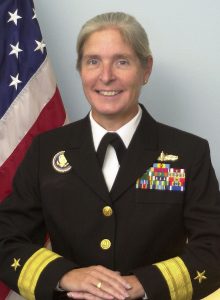 Retired Rear Admiral Deborah Loewer graduated from Wright State in 1976 with a bachelor’s degree in mathematics.

Wright State University graduate and retired Rear Admiral Deborah Loewer will give a virtual talk as part of the Alumni Speaker Series.

During her 31-year military career, Loewer was the first warfare qualified woman promoted to the rank of rear admiral in U.S. military history and served as the director of the White House’s Situation Room.

Loewer’s talk will take place on Tuesday, March 25, from 6 to 7 p.m. on Webex. Registration is required.

She will discuss her military career and her Wright State experience. She will also take questions from attendees. The talk is open to Wright State alumni, students, faculty and staff.

Loewer, who is originally from Springfield, graduated from Wright State in 1976 with a bachelor’s degree in mathematics.

On 9/11, Loewer accompanied Bush on his visit to an elementary school in Sarasota, Florida, and had to inform him that a plane had hit the World Trade Center. She later relayed the news that a second plane hit the towers to Bush’s chief of staff, who then informed the president.

She spent more than 13 years working onboard Navy ships, finding herself among the vanguard of women serving in a combat role. Loewer commanded two ships and in 2001 was promoted to rear admiral. She commanded all of the U.S. Navy’s mine warfare assets in Korea and the Persian Gulf. Her operational assets consisted of 28 warships, 30 helicopters, defensive and offensive mines and their associated mine assembly groups, 11 explosive ordnance teams and all of the U.S. Navy’s marine mammal systems.

She also served as vice commander of the military sealift command in Washington, D.C., helping to oversee a global transportation agency with a workforce of more than 8,000 and a fleet of more than 120 active ships whose primary mission is to move military cargo for deployed U.S. forces.

After retiring from the Navy, she served as a senior advisor to the undersecretary for intelligence and analysis at the Department of Homeland Security and as a program manager for the U.S. Army’s Prevention of Sexual Harassment and Sexual Assault Program.

She also worked as vice president for homeland security at Advanced Acoustic Concepts in Hauppauge, New York, and most recently was a volunteer advocate for senior citizens with Arlington County Human Services Division in Virginia.

In addition to her degree from Wright State, Loewer was selected as an Olmsted Scholar and studied at the Defense Language Institute in Monterey, California, and the Goethe Institute in Stuttgart, Germany. She received a Ph.D. in international law from the University of Kiel in Kiel, Germany.

She is a published author on the issue of women’s leadership and frequently speaks on such topics as U.S. foreign policy and crisis leadership.