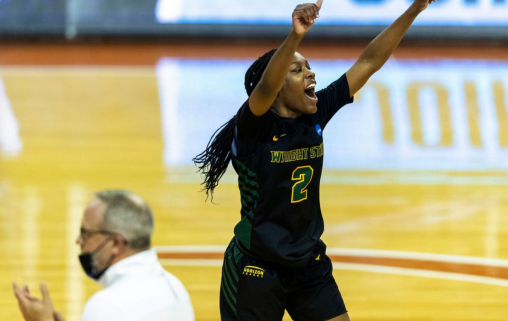 Junior guard Angel Baker scored 26 points and pulled down a game-high 11 rebounds to lead 13-seeded Wright State to a 66-62 upset over fourth-seeded Arkansas in the first round of the NCAA women’s tournament Monday in Austin, Texas.

The Raiders (19-7) built leads of 20-12 after one quarter and 38-26 after two on the way to their first tourney win in their third appearance.

They still led by 11 early in the fourth quarter, but the Razorbacks (19-9) kept chipping away.

Arkansas then missed, and Baker snagged the rebound.

Jada Roberson was fouled and made two free throws with 8.1 seconds left for a 66-62 lead.

The Raiders were overmatched in their first two NCAA games, losing by 46 to Kentucky and 23 to Texas A&M.

They’ll play either No. 5 Missouri St or No. 12 UC Davis in the second round Wednesday at a time and site to be determined. Those teams meet in a first-round game Monday night.