Junior guard Angel Baker hit what turned out to be the game-winning 3-pointer with 29 seconds left as 13th-seeded Wright State women’s basketball team upset fourth-seeded Arkansas 66–62 in the first round of the NCAA Tournament Monday, March 22, in  Austin, Texas.

Baker scored 26 points and pulled down a game-high 12 rebounds to lead the Raiders to their first-ever win in the NCAA Tournament. It’s the program’s second trip to the tournament in three years and third overall.

The Raiders (19-7) will play either No. 5 Missouri St. or No. 12 UC Davis in the second round Wednesday, March 24. Game location and tip time will be announced later.

The Raiders jumped to a quick lead and led 20–12 after one quarter and 38–26 at the half, only to see the Razorbacks slowly come back and even take the lead with less than two minutes in the game.

The Raiders took the lead again when Alexis Stover hit a 3-pointer, but the Razorbacks followed that up with a basket of their own.

That’s when Baker hit the decisive 3-pointer from the right win to give Wright State a 64–62 lead.

After a timeout, Arkansas missed another shot, and Baker grabbed the rebound. Guard Jada Roberson was then fouled and made two free throws with 8.1 seconds left to seal the victory for the Raiders.

Baker finished with the game’s only double-double, tallying 26 points and 12 rebounds to pace the Raiders, while Emani Jefferson also finished in double-digits with 13 points as Wright State had scoring contributions from seven different players. 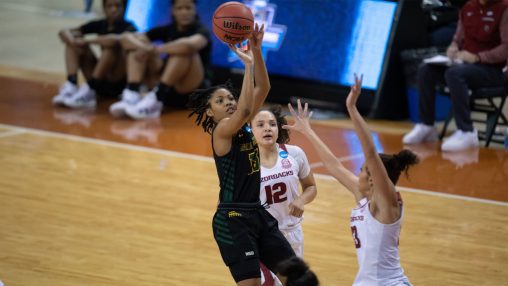 Angel Baker taking a shot in the Raiders’ win over Arkansas in the first round of the NCAA tournament. (Photo by Angela Chung)

The Raiders won the battle on the boards, 44-30, including 29 defensive rebounds, while their 15 offensive boards led to 14-second-chance points.