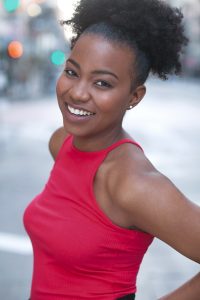 Renika Williams, a 2015 acting alumna from Wright State University, has landed a role as a series regular on Mindy Kaling’s new television series, “The Sex Lives of College Girls.”

Williams will play “Willow,” a student at New England Essex College, where the show takes place. The teen comedy-drama is expected to premiere on HBO Max in 2021.

Williams can also be seen in season 2 of Amazon’s “Modern Love.” She has appeared on “The Marvelous Mrs. Maisel” and was a series regular in the doc series “Pen to Pictures” and web series “Placeholders” and Cuddle.”

Her stage work includes Off-Broadway performances in “All the Natalie Portmans,” “The Climb,” “Cullud Wattah” and “Sweet.”

She starred in “Mud Row” at the People’s Light Theatre in Pennsylvania. Her regional theatre credits also include “Pipeline” at the Indiana Repertory and the Actor’s Theater of Louisville; “The Bluest Eye” at the Arden Theater in Philadelphia; the Cincinnati Shakespeare Company’s production of “A Raisin in the Sun”; “Antigone,” “To Kill a Mockingbird” and “A Christmas Carol” at the Cincinnati Playhouse in the Park; and “Race” at the New Edgecliff Theatre.

As a student at Wright State, Williams starred as Myrtle Mae Simmons in “Harvey” and Juliet in “Romeo and Juliet.”

“We are incredibly proud of Renika Williams,” said Joe Deer, chair of the Department of Theatre, Dance and Motion Pictures. “She started her training as part of our pre-college MAPP program before joining the B.F.A. Acting Program, and has been a great example of an exceptional artist, a positive spirit, a real entrepreneur in her career and a proud alum, to boot!”