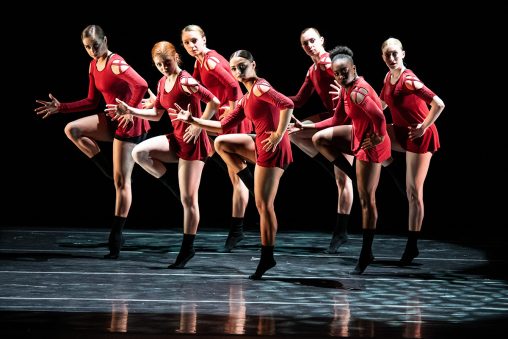 The online concert will be available on-demand beginning at 9 a.m. on Friday, April 16, through midnight on Tuesday, April 20.

Tickets to watch the concert cost $10 (plus fees) and can be purchased at showtix4u.com/event-details/50536. Tickets must be purchased before midnight on Sunday, April 18.

The works featured in the concert were created through Zoom rehearsals, site-specific and studio filming, and three-week-long residencies — all observing COVID precautions and regular testing.

“I was inspired by the strength, power, vulnerability and clarity that women possess. Ultimately when a woman walks into a space, she brings more than her pronouns,” he said.

In his 17th year as a dancer and fight captain in Disney’s “The Lion King” on Broadway, Mercer has performed in projects with Garth Fagan, George Faison, Aretha Franklin, Kevin Iega Jeff, Louis Johnson and Rod Stewart.

The ensemble will also premiere “Bloom,” by regional and national choreographer Ashley Pabst. She describes the piece as a contemporary ballet that illustrates how people experience the passage of time.

“A moment in time where we face intense challenges together while also feeling so far apart,” Pabst said. “Our transformation is not always loud, but the journey is profound.”

The concert will feature the premiere of “The Golden Ratio” by guest choreographer and teacher Gregory Robinson. The presence of the golden ratio, which is also known as the divine proportion, in the “natural world shows us that there are far more curves and spirals in evidence than only straight lines,” Robinson said. “This elegant idea was the inspiration for this work.”

“This past year has been punctuated by huge shifts and loss of rhythmical patterns; things have fluctuated rapidly,” she said. “This piece explores how we have all ebbed and flowed in our quest to stay connected as humans and communities.”

The Dance Ensemble will also perform Walther’s “Pull,” a modern dance work with music by composer Ezio Bosso. The piece describes the “building of tension in movement and in relationships and how we sometimes feel pulled apart,” Walther said.

The ensemble will present “Visual Voices” by Teressa Wylie McWilliams, professor and head of dance. She describes the work as a “visual canvas of images reflecting the push and pull of life’s dynamics that balance between constraint and freedom, all set to the driving rhythms of Afro Celt Sound System.”