Like many parents, Andrea Gutierrez’s mother and father dreamed of a better life for their family. When the large banking corporation that employed Gutierrez’s father began failing and massive layoffs ensued, the family decided to leave their home in Lima, Peru, and come to the United States.

For the Gutierrez family, Ohio seemed full of promise and possibilities. They already had friends in the Buckeye State, and they were confident that their only child, Andrea, would be able to receive a quality education. The family settled in Dublin, a suburb of Columbus.

Gutierrez was only 5 years old when her family relocated to the U.S. With her extroverted personality, she made friends easily and picked up the English language quickly. As a child and adolescent, she began developing a love for the arts and a talent for singing. In high school, she became active in theatre.

“It changed my life forever. I developed a passion for storytelling and being on stage,” Gutierrez said. “From the moment I graduated high school, I realized I wanted to be an actress.”

As she was approaching her high school graduation, Gutierrez knew that financing her college education was going to be a challenge. As a recipient of the Deferred Action on Childhood Arrivals (DACA), she is not eligible for any federal aid, such as loans or grants, to help pay for her education.

To save money, Gutierrez attended Columbus State Community College for a year as she auditioned for Bachelor of Fine Arts programs in theatre.

“Wright State University was the first school to accept me,” said Gutierrez. “But it was going to be impossible for me to pay out of pocket without any scholarship assistance.”

Thanks to the efforts of the Department of Theatre, Dance and Motion Pictures and the Office of Latinx, Asian and Native American Affairs, Gutierrez received enough scholarship support to enroll at Wright State.

“They did everything possible to make sure that I would be able to go to school,” she said. 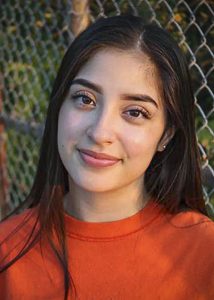 The scholarships proved to be an especially timely godsend when Gutierrez’s father developed an acute subdural hematoma — a clot of blood that develops between the surface of the brain and the dura mater, the brain’s tough outer covering — just weeks before she started classes in the fall of 2018. While he has since recovered, the condition kept her father out of work for nearly 18 months.

“He wasn’t able to get unemployment during that time,” she said. “If it weren’t for scholarships, I wouldn’t have been able to attend Wright State.”

“I knew this is where I wanted to spend the next four years of my life,” she recalled. “The students are so talented, and the faculty is so kind and considerate of my financial limitations. After two-and-a-half years here, I can say with absolute confidence that I made the right decision.”

Patrons of Wright State’s musical theatre productions might recognize Gutierrez from her performances in “If/Then” and “Into the Woods” in the Herbst Theatre. She was also cast in “Mamma Mia,” with performances scheduled to take place in the Festival Playhouse in spring 2020. A week before opening night, the production had to be canceled due to the onset of the COVID-19 pandemic.

The ongoing pandemic has proven to be challenging for Gutierrez and her family. Her parents work in the restaurant and hotel industries, both of which have been severely impacted by the pandemic. Gutierrez struggled with remote learning during Fall Semester 2020, when she took all of her classes online while living at home with her parents.

“It was really hard watching my class through a computer while my classmates interacted with each other,” she said.

Gutierrez especially missed taking dance classes in person, and she found it difficult to practice choreography at home, due to the lack of adequate space.

Since returning to campus for Spring Semester, Gutierrez has rediscovered her passion and motivation for performing.

“Being back here this semester has confirmed in my mind that this is where I need to be right now,” she said. “I’m really happy with where I am.”

Unfortunately, Gutierrez will miss performing at Wright State’s annual ArtsGala for the second year in a row. The annual gala raises $200,000 for student scholarships while showcasing the talents of Wright State’s students in the fine and performing arts. While the pandemic has once again thwarted plans for an in-person event, a variety of fundraising initiatives have been implemented to generate money for student scholarships.

To encourage contributions to the ArtsGala Scholarship Fund, the College of Liberal Arts has partnered with Global Love Dayton to create a limited-edition snow globe featuring some of the most iconic buildings and landmarks on Wright State’s campus including Alumni Tower, the “Turning Points” sculpture, the Wright State Nutter Center, the Boonshoft School of Medicine and the Creative Arts Center, where ArtsGala takes place. The university’s athletic mascot, Rowdy Raider, is also prominently showcased in the snow globe.

Only 250 snow globes will be available for purchase with proceeds going directly to the ArtsGala Scholarship Fund. Snow globes are $125 each and can be pre-ordered online at wright.edu/snowglobes.

An online silent auction will take place from April 14 to 20, featuring student artwork and dining packages from local restaurants. Gifts to the ArtsGala Scholarship Fund can be made online at wright.edu/artsgala.

As an ArtsGala scholarship recipient, Gutierrez is grateful for all of the support that ArtsGala patrons have provided over the years. She says that helping to finance someone’s education is “one of the most beautiful and selfless things you can do.”

Gutierrez hopes that ArtsGala can resume in 2022, when she will be a senior at Wright State. “Having that night again will be tremendous,” she said. “We’ll be able to show our donors what we’ve been working on all year and thank them for the opportunities they have given us.”

After graduating from Wright State, Gutierrez plans to move to New York City. “I love the city, and I want to have that experience as a working actress,” she said. “I think my training at Wright State has been preparing me very well.”

Gutierrez’s dreams go above and beyond performing on stage. She would like to open her own theatre organization one day for children and adults from low-income and underrepresented populations. And she hopes to earn a bachelor’s degree in psychology at some point, so she can utilize both theatre and psychology in rehabilitation programs for people who are incarcerated.

“I’d like to use theatre as a tool to help people remember their worthiness and humanity,” she said. “I don’t want people to hurt. I’m just motivated to help as many people as I can.”

Gutierrez is a firm believer in the power of theatre to bring people together and celebrate the contributions of all of humanity.

“The arts, in general, are really striving to have more diversity in the stories that they share and the people on their stages,” she said. “I truly believe that storytelling has the power to change the world. Theatre can be a window into stories that haven’t been told.”

Wherever life’s journey takes her, one thing is for certain: Gutierrez will always be thankful for the opportunity to earn a college degree and for the donors and scholarships that helped make it possible.

“If I told my high school self about where I am now, I wouldn’t believe it,” she said. “Attending college seemed like a faraway dream, and the fact that I am here now blows my mind. I am forever grateful.”