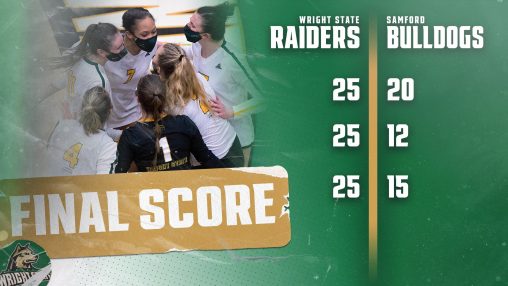 The Wright State volleyball team made more history on Wednesday, April 14, and did so in dominating fashion, as the Raiders swept Samford in three sets in the opening round of the NCAA Championship in Omaha, Nebraska, to capture the first NCAA win in program history.

The Raiders advanced to take on Texas on Thursday, April 15, at 7 p.m. on ESPN3. This will be the first meeting between Wright State and Texas on the volleyball court.

In addition to being the first NCAA win for the Raiders, the victory was the first for a Horizon League team in the NCAA Championship.

Wright State was in control all night, using a Celia Powers’ kill to give them a 2-1 lead in the opening set and never looking back. Powers had the first point of the match and following the brief 1-1 tie and another kill from Powers, the match was never again tied as the Raiders offensive attack was relentless.

The Raiders finished the night with a .304 team hitting percentage, committing only 10 errors over the three sets while holding Samford to a .149 team hitting mark, including a -0.033 percentage in the second set. 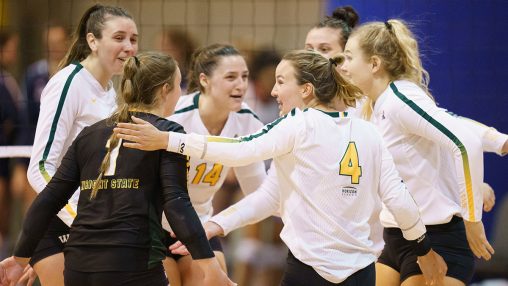 Wright State racked up 14 service aces as a team, with Callie Martin (5), Teddie Sauer (4) and Lainey Stephenson (3) all with multiple tallies from the service line. Megan Alders and Nyssa Baker both had a match-high nine kills, while Powers finished with eight kills of her own. Sauer did a little bit of everything, adding six blocks and five kills to her four aces.

Stephenson passed out 27 of the Raiders’ 34 assists, while Jenna Story (18) and Stephenson (10) each tallied double-digit digs as Wright State recorded 48 total digs over the three sets.