A different kind of influencer

Mohamed Al-Hamdani ’03, ’19, immigration lawyer and president of Dayton Public Schools Board, is one of the city’s most influential young leaders 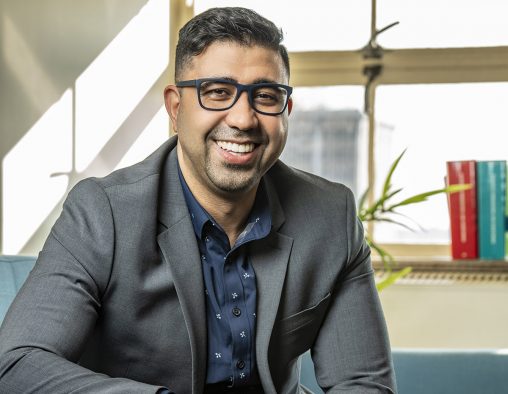 Al-Hamdani is an immigration law attorney, president of the Dayton Public Schools Board of Education, and involved with more committees and groups than could possibly be listed. Al-Hamdani loves to be involved in all things Dayton.

“[It] started at Wright State. I was part of the Commuter Student Association; I was an opinions editor at The Guardian; I was on the University Activity Board,” he said. “If there was a group to be associated with, I was part of it—it just took me over.”

Al-Hamdani earned a bachelor’s degree in sociology from Wright State in 2003, then an M.B.A. in 2019. In between stints at Wright State, he received his law degree in 2013 from the University of Dayton. But his story began in Dayton much earlier.

Al-Hamdani grew up in Iraq. After the Gulf War, Al-Hamdani and his family were sent to a refugee camp. His father was part of the uprising against Saddam Hussain’s regime. They were given asylum in the U.S. in 1992 and settled in Dayton, living in St. Anne’s Hill.

“We went from a desert refugee camp to New York City. We had a choice of Philadelphia or Dayton,” Al-Hamdani said. “We didn’t know either one, so Dayton was chosen for us.”

Al-Hamdani made his way through the Dayton Public Schools (DPS) system, going to Fairview Middle School and Colonel White High School. This connection to DPS is one reason he wanted to get involved with the Board of Education. The other was a changing political dynamic.

“In 2016, there was a swift change in politics. For a long time people sat on the sidelines and I wanted to be involved in a way that shaped the community,” he said. “I had two boys who were young. Growing up, I had no Arab role models and I want to make sure my boys had that.”

Al-Hamdani said Dayton schools helped shape who he became, and he wanted to give back. He also likes working with the Board of Education as well because of the diversity and enthusiasm of the parents, students, and teachers in the district.

“What’s rewarding is the fact that you see the passion of the community. That passion comes at you hard. Sometimes you make decisions people disagree with, but it’s rewarding to see them care so much,” he said.

Being an immigrant and seeing how immigration law was misunderstood pushed Al-Hamdani to get his degree and open an immigration law practice. He said being a lawyer was something he knew would happen early on.

“From a young age, I was told to be a lawyer,” he said. “I actually auditioned for Dream Girls, and I was cast as Marty the lawyer. People just saw that in me.”

Al-Hamdani started his practice, Larson, Lyons & Al-Hamdani, in 2016. The offices are located in downtown Dayton on Second Street. He focused on his practice for a few years before deciding to go back to college to earn his M.B.A.

“I needed help to see how a business was run—needed to learn finance and economics to be successful,” he said. “Being at Wright State really taught me how to run a business.”

Now, Al-Hamdani lives in downtown Dayton with his family. Besides everything in his professional life, he enjoys playing soccer and spending time with his boys. He still thinks being a Daytonian is a wonderful thing, especially with all the progress currently happening in the city.

“There’s an energy of progress and movement. I love the diversity I’m seeing,” he said. “That’s always been important for me and to show that to my children. Dayton has a thriving atmosphere.”

He wants immigrants to know Dayton as a welcoming city. Al-Hamdani said Dayton was a wonderful place to grow up and he and his family have always felt accepted. He said the future is bright for Dayton and its immigration population.

“My hopes for the future are to grow this business and help immigrants to become part of the ‘American Dream,’” he said. “I want to help get Dayton back to the thriving district it used to be.”