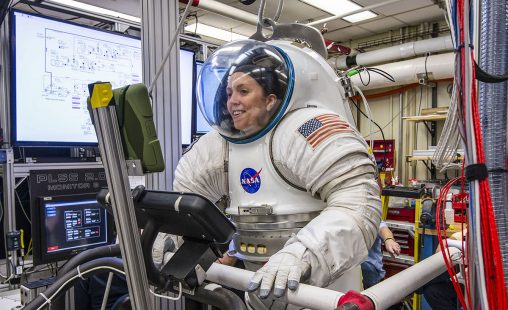 Lindsay Aitchison wears a prototype spacesuit as part of a test of the Portable Life Support System. The test goal is to evaluate thermal control and life support system performance. (Photo courtesy of NASA)

When NASA astronauts return to the Moon in 2024, Lindsay Aitchison’s handiwork will help keep them alive.

Aitchison, who earned a master’s degree in industrial and human factors engineering from Wright State in 2011, has played a key role in the space agency’s effort to design a new spacesuit to improve the ability of both female and male astronauts to walk around, work, and conduct science experiments on the Moon.

Aitchison started her career at NASA as an engineer testing and modifying designs for the new spacesuit. For the last two years, she has played a more strategic role, using her experience in spacesuit design to help formulate plans to return astronauts to the Moon. She has also collaborated with scientists to determine which experiments the astronauts should perform on the lunar surface.

Aitchison is the program executive for extra-vehicular activity in the Advanced Exploration Systems Division at NASA headquarters, where her team supports the Artemis missions to send humans back to the lunar surface, and eventually to Mars.

Aitchison is proud to help astronauts go to space and advance the goal of human exploration.

“I believe in the goals of exploration,” she said. “I think that’s what humans are meant to do—go out there, explore, discover, and inspire the next generation. It’s something tangible that can inspire other people to follow in these types of careers, to be creative, to be productive, and to build something that helps everybody else.”

One of the notable aspects of the 2024 Moon mission is that it will include the first woman to land on the Moon. Aitchison has helped design spacesuits that properly fit female astronauts. For her, it is an enormous responsibility to play a part in ensuring that the NASA astronaut crew and the space agency’s workplace are both inclusive.

“If we do our jobs right as a broad engineering team, we are opening doors for a whole bunch of people,” Aitchison said. “I think it’s important for everybody to see themselves as part of the space program, and inclusive engineering is one way to do that.”

It’s been 40 years since NASA built a new spacesuit, and those suits, initially used in the Space Shuttle program, remain onboard the International Space Station. The spacesuit must protect astronauts in outer space and allow them enough mobility to perform their tasks.

Astronauts on the Moon will need more mobility than their colleagues on the International Space Station. Because the space station is operating in microgravity, astronauts do not need to use their legs; so, their spacesuits have little mobility in the lower body. But, as NASA sends crews on exploratory missions to the Moon and eventually Mars, Aitchison said, engineers have created a suit that enables lower-limb mobility for astronauts. The new spacesuit—the Exploration Extravehicular Mobility Unit (xEMU)—also includes a more flexible upper torso that enables proper arm movement.

Aitchison points out that, in videos of the Apollo astronauts on the Moon, you often see them hop around, fall down, and then take a long time to get back up. “That’s not because of the gravity situation,” she said. “It’s because there’s not enough mobility in the spacesuit itself.”

The xEMU is adaptable and includes up to five upper-torso sizes that are available in two units. Aitchison says the xEMU is the smallest suit NASA has ever built and flown.

“There’s so much stuff you have to bring for each of the missions,” she said. “So we’re really trying to optimize and expand the sizing range, but minimize the number of parts that it takes to do that.”

In addition to redesigning the mobility systems, engineers also improved the life support system, making it more efficient, lighter in weight, and longer-lasting than the systems from the Apollo program and the space station. “That gives you the advantage of being able to go more places, stay outside longer, do more science,” Aitchison said.

NASA engineers also built the new suit so it can evolve with new missions and even new destinations. As new technologies become available, NASA hopes to be able to improve xEMU and keep it usable longer instead of starting over.

“It will grow with us,” Aitchison said.

Aitchison’s career at NASA has evolved since she joined the space agency as an undergraduate engineering student. She spent the first 10 years working in the spacesuit lab, helping with the hardware design itself.

Her responsibilities started becoming more strategic. She served as deputy project manager for spacesuit development for a few years before assuming her current role overseeing extra-vehicular activity—spacewalks. Extra-vehicular activity systems include the spacesuits themselves, the tools astronauts use when they are out on spacewalks, and crew interfaces with other vehicles. 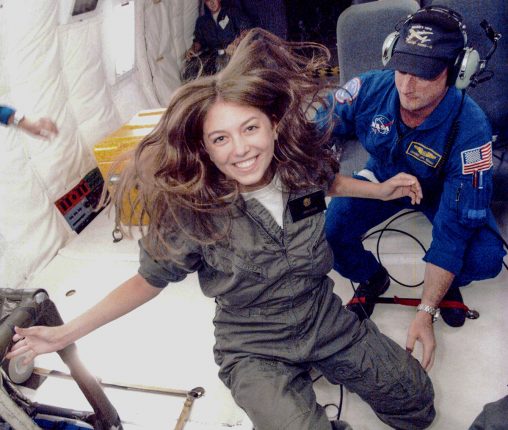 Lindsay Aitchison flies on KC-135, or “Vomit Comet” aircraft, with the Student Microgravity Research Experiment in 2005. (Photo courtesy of NASA)

She uses her experience in spacesuit design to help formulate NASA’s strategy for the Artemis program, coordinating her team at NASA headquarters and Johnson Space Center in Houston.

She was also able to participate in field testing spacesuit prototypes in the desert. Working with NASA’s Desert Research and Technology Studies (RATS) team, she helped put the suits through different scenarios and evaluate different tools, robotics, and habitats.

“It really gave me a good understanding of the bigger picture of what it means to do a spacewalk, especially for an exploration program,” she said.

Aitchison also spent time as a test subject, testing numerous spacesuit designs in many different test environments. It was an opportunity she describes as “super fun.”

She was able to test a suit weighing between 84 and 130 pounds, trying to complete tasks like walking, kneeling, picking up rocks, and moving objects up and down. It was one of the most physically challenging things she has done, Aitchison said.

“Really putting the suit through its paces, that can be a little physically taxing,” she said.

More fun was testing suits in simulated reduced gravity environments like the spacesuit lab in the Neutral Buoyancy Lab, a large indoor pool of water in which astronauts perform simulated EVA tasks, and on the “Vomit Comet,” a plane that simulates microgravity.

Getting to test the spacesuits was helpful for the engineers, Aitchison said, because it helps them to better understand and respond to the feedback they receive from the astronauts.

“Until you have been inside that suit yourself, it’s really hard to appreciate and understand the feedback you’re getting from the test subjects,” she said.

Aitchison got into spacesuit design by happenstance. Since she was little, she had dreamed of working at NASA. When enrolled as an undergraduate student in the mechanical engineering program at Purdue University, she started working in a co-op program at NASA’s Johnson Space Center in Houston. Over five tours, she worked on five different position groups, beginning in Mission Control.

On her third co-op rotation, a friend encouraged her to consider the spacesuit lab, where she could work on hardware. It was a natural fit.

“I was working in the technology development field and I just loved being in the lab,” she said.

She also loved doing experiment design, which influenced her to pursue her master’s degree in industrial and human factors engineering. Aitchison realized she would need to understand how to design tests to work with humans—“because humans are notoriously unrepeatable objects”—if she were to excel as a spacesuit engineer.

At Wright State, she focused on human-in-the-loop testing, which involves using an actual end-user or test subject. For instance, an actual person wears a spacesuit and tries to complete certain tasks, allowing engineers to test the suit or their tools. The program helped train Aitchison to set up the tests she and her colleagues needed to assess their spacesuit work.

“For me, that was really important because one of my primary jobs on the suit engineering team at the time was to help understand and quantify the mobility of the spacesuit to make sure it could do all these new jobs we hadn’t done since the Apollo program,” she said.

Aitchison enrolled in the program within Wright State’s College of Engineering and Computer Science because it allowed her to pursue her master’s degree while still working for NASA.

“Wright State actually had one of the best distance learning programs at the time for industrial and human factors engineering,” Aitchison said.

While college students everywhere are taking classes on Webex or Zoom today, that was rare at the time Aitchison was pursuing her master’s degree. In fact, Wright State’s program was one of the first that had real-time online student participation.

“I really wanted to have that in-person experience even though I was a distance-learning student,” she said. “The program had what I needed in terms of being able to support my career and what I was doing at the time.”

For more information on the 2024 Moon mission, the Artemis program, visit nasa.gov/artemis.