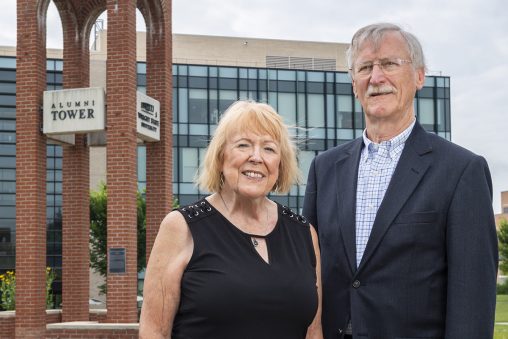 Karen Mellar Wolf, who received bachelor’s and master’s degrees in education, and Jerry Sutton, who graduated with a master’s degree in system engineering, were charter members of the Wright State University Alumni Association. (Photo by Erin Pence)

A small group of volunteers founded the Wright State University Alumni Association in 1971, bringing together graduates by coordinating activities and services to enrich the Wright State community.

With the help of Pat Moran, the first director of alumni affairs, the volunteers sought to foster a sense of fellowship and collegiate heritage through the new Alumni Association.

“This cadre seemed to rotate through offices, frequent campus events and instigate activities to attract membership. It was a capable, enthusiastic group which lead the association in its formative years,” said Jerry Sutton, who graduated with a master’s degree in system engineering.

Sutton, Karen Mellar Wolf and Douglas Boyd were three of those volunteers, helping the Alumni Association to grow into a vital part of the university community. As charter members of the Alumni Association, they served for many years on the Board of Directors, including terms as president.

This fall, the Alumni Association will celebrate 50 years of fellowship and support for Wright State. Over the past five decades, Wright State has awarded degrees to more than 115,000 alumni.

While the Alumni Association was initially a dues-paying organization, the board eventually made all graduates members of the organization. That decision was “one of the most important accomplishments in the early days,” said Boyd, who graduated with a bachelor’s degree in secondary education with a concentration in social studies.

“It is gratifying to see the growth in involvement,” he said

Wolf served on the Board of Directors for over 20 years, with terms as secretary, vice president and president. She is believed to be the longest-serving board member. It was her idea to institute term limits on the board to ensure it has “new blood and fresh ideas.”

“When I graduated from Wright State, everyone in my family was so proud, so when the Alumni Association was formed, I was encouraged to join,” said Wolf, who earned bachelor’s and master’s degrees in education.

As a board member, Wolf was able to connect with Dayton-area business leaders and said it was fun to attend events at the Nutter Center.

Wolf’s Wright State roots run deep. Her husband, who she met in an accounting class, their two daughters and a grandson are all Wright State graduates.

As a student, Boyd was active on campus and in Student Government and viewed participating in the Alumni Association as a logical extension after he graduated in 1971.

“I looked at it as an investment in the future and to help pay back WSU for a great education,” he recalled. “I felt it imperative that alumni get involved and support the university in many ways.” 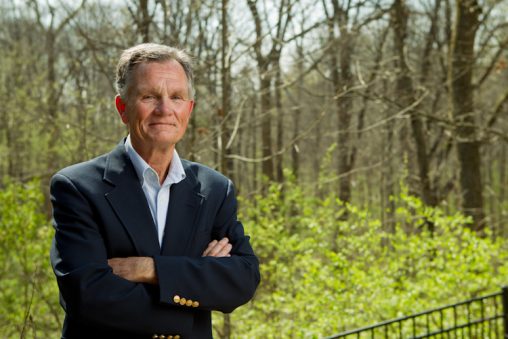 Douglas Boyd graduated from Wright State in 1971 with a bachelor’s degree in secondary education with a concentration in social studies.

While many Alumni Association events in the 1970s were social or organized around Wright State athletics, Boyd said the association eventually became well known for recognizing outstanding faculty members and alumni.

“I had the opportunity to present these awards at four separate commencement ceremonies,” he said.

Sutton said it has been rewarding to remain involved in the Wright State community. After serving on the Alumni Association board, he joined the fledgling Wright State Foundation board in 1993, serving for nearly nine years, including as treasurer and vice president.

He also participated in planning the university’s first capital campaign and has established two scholarships at Wright State: the Sharon K. Sutton Scholarship, in memory of his first wife, to benefit nontraditional female business students, and a planned gift that will benefit female engineering students.

“Wright State has been good for me,” he said. “I hope I have reciprocated.”

The Alumni Association will incorporate its 50th anniversary celebration into many of its events this fall, including Homecoming Week and the 2020 and 2021 Alumni Achievement Awards ceremony on Oct. 1 and the Legacy Scholarship Brunch on Oct. 2.

The annual Alumni Night at the Game in December at the Wright State Nutter Center will include a special presentation at halftime celebrating the association’s 50th and Rowdy’s birthday.

Event details will be posted this fall on the Alumni Association’s events calendar.