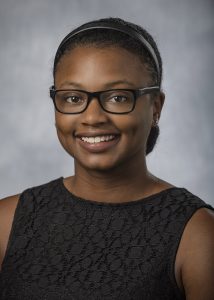 Jennae Shelby is a student in the M.D./Ph.D. dual-degree program in biomedical sciences at the Boonshoft School of Medicine.

Jennae Shelby, a student at the Wright State University Boonshoft School of Medicine, has received an F30 Fellowship from the National Institutes of Health (NIH).

Shelby, who is in her fifth year of the M.D./Ph.D. dual-degree program in biomedical sciences, is the first Wright State student to earn this fellowship.

The F30 fellowship supports highly promising predoctoral students who are in a combined M.D./Ph.D. program. It prepares students for careers that will have a significant impact on the nation’s health-related research needs.

In 2002, the F30 fellowship was renamed the Ruth L. Kirschstein National Research Service Award, in honor of Ruth Kirschstein, M.D., a physician-scientist who worked on the polio vaccine and was the first woman to direct an NIH institute. Kirschstein was an advocate for research training and increasing underrepresented biomedical and physician-scientists, particularly in emerging research areas.

Shelby’s clinical focus is neurology, specifically cognitive disorders. Her research focuses on neurodegenerative diseases, such as diabetes and Alzheimer’s, often characterized by cognitive impairment and dementia.

Research done at Wright State has found changes in brain cell structure to be key in these conditions. Shelby hopes to uncover more details about these brain cell changes, leading to the development of new treatment options.

The research is also personal for Shelby. “Type 2 diabetes and Alzheimer’s disease are more prevalent in the Black community, and my family has been impacted by both,” she said.

“Jennae receiving such a high honor is the ultimate recognition of the effort that students and staff in our lab put in every day to foster collaborative research and learning,” Susuki said. “Jennae’s project supported by this award is based not only on her hard work but also the scientific accomplishments of her fellow lab members and the support of the NCBP faculty.”

Shelby credits much of her success to the opportunity to work with and learn from amazing educators at Wright State.

“Dr. Susuki is fiercely committed to his students and the collaborative environment in his lab,” Shelby said. “I feel this grant highlights his success as a mentor and teacher.”

She also recognized Mark Rich, M.D., Ph.D., professor of neurology and of neuroscience, cell biology and physiology, as a role model for his successful balance of bench and clinical research, and Debra Mayes, Ph.D., formerly with Wright State, who provided Shelby with her first basic science research experience.

Shelby was inspired to help people through medicine and science by community-focused physicians Gary LeRoy ’88, M.D., associate dean of student affairs and admissions and associate professor at the Boonshoft School of Medicine; Quinn Capers, M.D., cardiologist and former dean of The Ohio State University School of Medicine, who attended Shelby’s church in her hometown of Columbus; and Nanette Lacuesta, M.D., a Columbus physician who is director of OhioHealth Physician Diversity Scholars.

“I believe representation matters and have been inspired by the Black women in my life excelling in academia and medicine,” said Shelby.

These women include Clintoria Williams, Ph.D., assistant professor of neuroscience, cell biology and physiology in the Boonshoft School of Medicine and the College of Science and Mathematics; Kimberly Austin, M.D., Shelby’s mentor with OhioHealth Physician Diversity Scholars; and Lucretia Long, a nurse practitioner at the Ohio State Wexner Medical Center. Shelby worked with Long after graduating from Ohio State with a bachelor’s degree in neuroscience.

“This is a wonderful honor not only for Jennae and Dr. Susuki’s lab but also for the entire NCBP family and the CoSM and BSOM combined medical degree and biomedical sciences Ph.D. program. Such nationally competitive awards validate not only the excellence, hard work, creativity and determination of our students, but also of the faculty and staff who educate, mentor and train them,” said Eric Bennett, Ph.D., professor and chair of the Department of Neuroscience, Cell Biology and Physiology.

Shelby’s future goals include not only to be a physician-scientist in neurology, specializing in cognitive disorders, but also a principal investigator in her own lab, advancing treatments for neurodegenerative conditions.

“I’m honored that the NIH chose to fund my grant and highlight the importance of increasing diversity in neurodegenerative research,” Shelby said. “I am also excited to represent Wright State and BSOM through securing our first NIH predoctoral fellowship.”