Festival of Flight returns to Wright State on Sept. 25 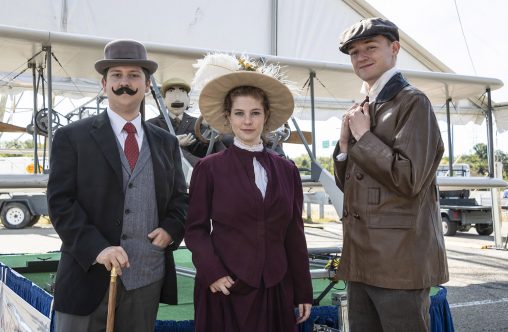 The Festival of Flight will feature flyovers, the premiere of a film about aviation in the Miami Valley, hands-on experiential activities, a kid’s zone, food trucks, live bands, a beer garden, vendors and more.

The Festival of Flight will celebrate the importance of aviation in the Miami Valley when it returns to Wright State University on Saturday, Sept. 25, from 11 a.m. to 7:30 p.m. in Lot 1 in front of the Student Union. Admission is free.

View Festival of Flight’s full list of activities and events at festivalofflight.org.

The festival will feature live entertainment, fun aviation-related educational experiences and creative local innovations. Attendees can check out a Blackhawk helicopter and try flight simulators and a parachute simulator.

The festival will offer popular food trucks and food stands as well as flights of beer and wine in a beer garden.

The National Aviation Hall of Fame will premiere its documentary “A Journey Through the Birthplace of Aviation” with a special screening at 12:30 p.m. in the Student Union. The screening will be followed by a moderated panel on Dayton’s unique contributions to aviation. Reserve your seat.

“A Journey Through the Birthplace of Aviation” explores Dayton’s aviation heritage and the mission of the National Aviation Hall of Fame. The film was written and directed by Adam White, a 1995 Wright State motion pictures graduate, and Kara White of Hemlock Films.

The National Parks Service will offer Free guided walking tours of Huffman Prairie, where the Wright brothers mastered the art of flying, at 1, 2, 3 and 4 p.m. Reserve your spot.

Wright State Physicians will schedule COVID-19 vaccine appointments during the Festival of Flight. Moderna, Pfizer and the Johnson & Johnson vaccines are available.

Michelle Rouch, an artist and 1992 Wright State electrical engineering graduate, will sign copies of the new children’s book “Astronaut Al Travels to the Moon.” Rouch, an AIAA associate fellow, illustrated the book, which was written by Apollo 15 astronaut Al Worden.

The inaugural Festival of Flight was held in October 2019 and welcomed more than 4,000 visitors to the grounds of Wright State.