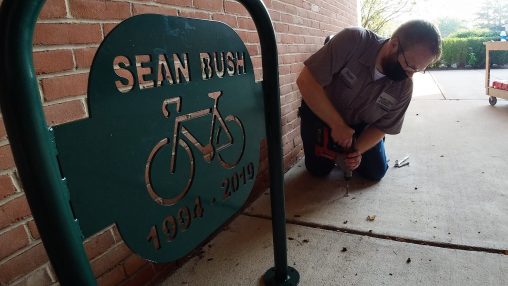 Sean Bush and Mathew Lovell crossed paths in the classroom at the Wright State University Boonshoft School of Medicine in clinical rotations – and sometimes on local bike trails.

“I always saw him riding to and from classes or to rotations,” said Lovell. “If I had a little bit of time, I would squeeze in a bike ride and I would see him out riding as well.”

Lovell is a novice biker while Bush was an avid cyclist. Because of their busy schedules, the two never actually had a chance to ride together. But Lovell often followed his classmate’s impressive biking achievements online.

“I always saw him on Strava, which is a fitness app where you can share your workouts,” said Lovell. “He would bike at times hundreds of miles on the weekend.”

On June 14, 2019, the 24-year-old Bush was struck by a vehicle while riding his bike in Beavercreek and later died.

“It was a really big shock,” said Lovell, who found out about the accident while out of town.

After his passing, the Boonshoft School of Medicine class of 2021 sold bicycle pins to raise money for the Sean P. Bush Memorial Scholarship Fund.

“We wanted to commemorate him and make sure his memory lives on,” said Lovell, who is now an emergency medicine resident at the University of Pittsburgh.

But there was one more gift the class of 2021 would give to celebrate Bush’s life and his love for biking, following a tradition of the graduating class giving a gift to the university.

Three customized bike racks honoring Bush were installed at the rear entrance of White Hall, where Bush parked his bicycle when he biked to class. 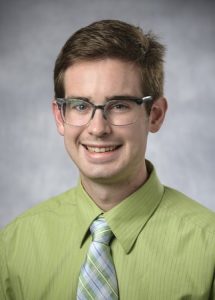 Medical student and avid cyclist Sean Bush died while riding his bicycle in 2019.

“We thought it would be a great way to spruce up the area,” said Lovell.

The rack design includes Bush’s name at the top with 1994–2019 at the bottom and a bicycle in the middle. The permanent bike racks were created by Buchanan Aluminum and Welding LLC. The racks were installed by Wright State Facilities Operations and Maintenance staff.

The racks are painted in Wright State green, which happened to be Bush’s favorite color.

“It all kind of fit together quite well,” said Lovell.

Donations to the Sean P. Bush Memorial Scholarship Fund can be made online.