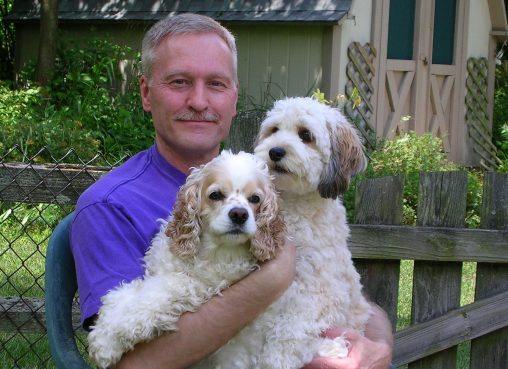 Larry Kurdek with his beloved dogs, Gretta, left, and Lilly. Kurdek was a professor in the Department of Psychology until his passing in 2009.

To the Wright State University community, the late Larry Kurdek was best known as an outstanding teacher and professor of psychology. To the rest of the world, he was regarded as one of the leading social science researchers on lesbian and gay committed relationships.

While Kurdek authored more than 145 journal publications in the fields of commitment and satisfaction in family relationships, he was never one to be boastful about his work.

“He was a very modest man and would never bring attention to himself,” said Gene Siesky, who was Kurdek’s partner for 32 years. “He was quite content to just be acknowledged by his peers.”

When Kurdek’s 10-year longitudinal study on same-sex cohabiting couples and heterosexual married couples was published in the American Psychologist, multiple news sources picked up on it. Kurdek was even invited to appear on “Good Morning America,” but he declined.

“Larry said he was a researcher, not a pop psychologist,” Siesky recalled. “I said to him in jest, ‘what are you going to do when Oprah calls?’ He said, ‘I’ll decline her too.’”

While Kurdek may have been hesitant of the media spotlight, he did not share the same reticence about expressing pride in his upbringing. Born to a Polish family on the south side of Chicago, Larry grew up with his fraternal twin brother, Leonard, and three other siblings — including a set of twin girls.

“Being Polish was important to Larry,” said Siesky. “It was a big part of his identity.”

After completing his doctorate in 1976, he accepted an assistant professor position at Wright State, where he quickly rose through the academic ranks — becoming professor in 1984 — and where he remained for his entire career.

“He loved teaching,” said Siesky. “He was a person who enjoyed teaching others, helping them learn.”

Kurdek was frequently rated as an outstanding teacher by his students in the Department of Psychology. He also taught research methodology and statistics courses as an adjunct faculty member in the School of Professional Psychology.

“He was highly regarded there as well,” said Siesky.

As much as Kurdek enjoyed teaching, he found the greatest fulfillment in his research.

“He was very proud of his 10-year longitudinal study,” said Siesky. “There wasn’t one that existed prior.”

For more than a decade, Kurdek sent relationship surveys to heterosexual cohabiting, married and remarried couples, gay couples and lesbian couples. The inclusion of large numbers of gay and lesbian couples had not been done before on such a scale.

Kurdek also helped craft the APA’s Resolution on Sexual Orientation and Marriage, in which the association committed itself to “take a leadership role in opposing all discrimination in legal benefits, rights and privileges against same-sex couples.” He also helped to develop the APA’s Resolution on Sexual Orientation, Parents and Children, where the association went on record opposing “any discrimination based on sexual orientation in matters of adoption, child custody and visitation, foster care and reproductive health services.”

In 2003, Kurdek received the Award for Distinguished Scientific Contributions from the Society for the Psychological Study of Lesbian, Gay and Bisexual Issues.

While Kurdek was deeply devoted to his teaching and research, he was also passionate about the other great loves in his life: family, music and dogs.

“He was always a lover of dogs,” said Siesky, who shared cockapoos, Gretta and Lilly, with Kurdek.

Kurdek died on June 11, 2009, following a four-year-long battle with cancer. He passed away peacefully at home with his beloved dogs by his side — just as he had wanted. He was 57 years old.

In his blog, Beyond Homophobia, Gregory Herek wrote that Kurdek’s “premature passing is a great loss to the field of psychology and to everyone who supports marriage equality.”

Prior to his passing, Kurdek established the Larry Kurdek Memorial Scholarship at Wright State. While the fund has distributed small scholarships over the years to students studying psychology, it will soon make an even greater impact in the lives of students.

Kurdek’s twin brother, Leonard, passed away in October 2021. Unbeknownst to Siesky and the rest of the Kurdek family, Leonard left almost all of his estate to his brother’s scholarship fund. The estate gift was substantial enough to create an endowment, which will allow Kurdek’s scholarship to continue for perpetuity.

“We were quite surprised,” said Siesky. “Lenny loved his brother and held him in high regard. Through the scholarship, Larry could carry the flag for the family and his name would be there forever.”

Siesky has helped select prior recipients of Kurdek’s scholarship and will continue to be involved in selecting the recipients of the Dr. Larry Kurdek Endowed Scholarship.

“When I read their stories, I get a sense of how much this could help someone,” he said. “Larry was a very generous person. He would want the scholarship to go to a deserving student who could benefit from the financial help.”

Siesky looks forward to meeting future recipients of the scholarship and introducing them to not only Larry Kurdek, the teacher and researcher, but the man who loved family, music and dogs.

“Everybody liked Larry,” he said. “I never met a single person that didn’t.”